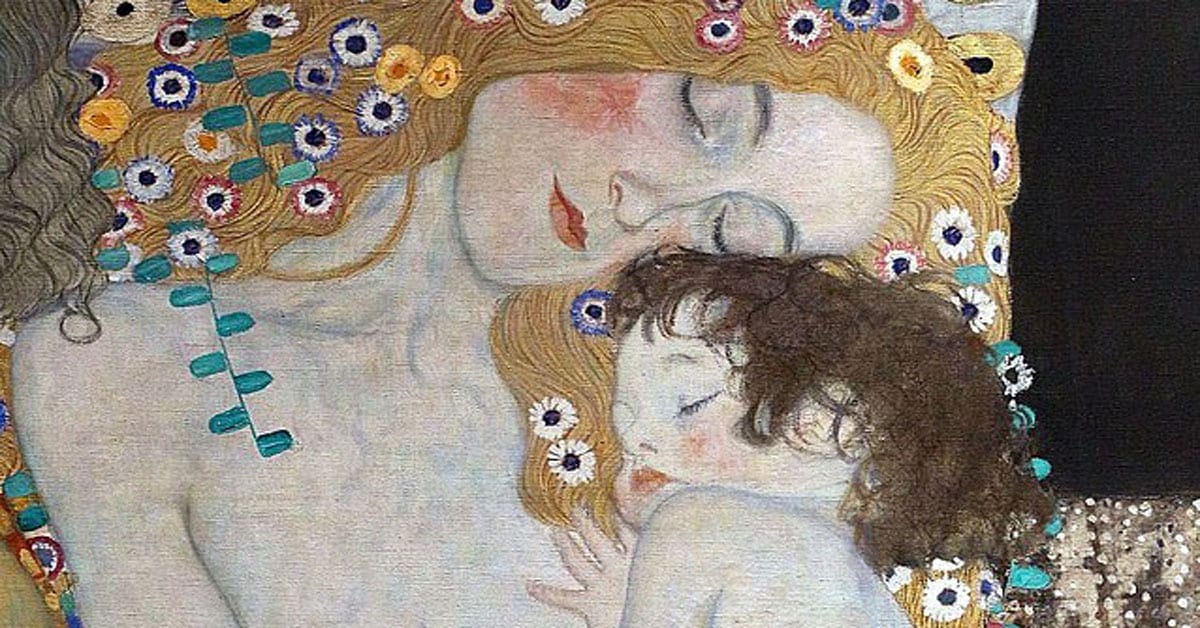 “Mother and Child,”  also known as “The Three Ages of Woman,”  is one of the most significant artworks by Gustav Klimt, created in 1905. It was the first large-scale oil painting created by the artist. It features three female figures. Infancy, motherhood, and old age are said to be the three primary periods of a woman’s life. However, the “Mother and Child” part of the masterpiece creates more positive feelings in the viewer.

You must be curious about an amazing, detailed piece by Gustav Klimt, Mother and child. So let’s explore it.

Who Was Gustav Klimt? – Briefly About the Author

Gustav Klimt, who was born in a modest household and whose father worked as a gilder, enrolled in the Vienna School of Applied Arts in 1876. He kept up his studies there until 1883. He assisted Hans Makart, who was in charge of planning the Festzug (the imperial couple’s silver wedding) in 1879.

Klimt’s “Philosophy” fresco, which was deemed an insult to public decency in 1900, provoked a sensation. When Gustav Klimt displayed the mural “Medicine” in 1901, his sponsor, Minister of Education von Harten, made a plea in the Chamber of Deputies.

The paintings on a golden backdrop came to a close with “Dana” and “The Kiss” two pieces displayed at the Kunstschau, the first group exhibition by Klimt and his associates following the dissolution of the Secession.

Seven children, all of whom were creative, made up Klimt’s household. Both of his parents had an artistic side to them. Although his family was not wealthy, there was plenty of affection, as seen by the themes he addressed in works like Mother and Child.

Details Of The “Mother and Child” Painting

The painting “Mother and Child” is part of a large artwork created by Klimt. It was first displayed in Berlin from May to October 1905 as part of the second Deutsche Künstlerbund exhibition, which was titled Die Drei Lebensalter. In the complete artwork, Mother and Child, several stages of a woman’s life are shown. Gustav Klimt painted this picture in 1905, and it depicts a young woman with a kid sleeping next to her. The title of this picture is “Le Tre Eta Della Donna.”

In addition, Gustav Klimt is renowned for numerous works that examine the transformations that women experience, some of which are affected by society. In contrast to earlier paintings like “The Theater in Taormina,” the artist decided to use fewer sensual motifs in this one. The lines used to depict the feminine figure have a Japanese aesthetic.

Several painters of the time, including Klimt, were influenced by Japanese art. He created landscapes and other works that emphasized the feminine form using its techniques. A further example of the significant impact Japanese prints had on Klimt and the Secession is the large-sized picture “Fishblood.”

Incredibly detailed portraits of the younger two generations are seen in Klimt’s Three Ages of Woman in this cropped portion of the larger original artwork. Notably, to create this more positive artwork, the elderly woman is eliminated, and the negative representation of her position is averted. This is how the “Mother and Child” piece is created.

In “Mother and Child,” Klimt effectively employs Japanese aesthetic techniques to highlight the facial expressions and body language of his subjects. His picture, “Love,” features a vertical format that is Japanese and was finished six years before “Mother and Child.”

Both the infant and the mother figure have a somewhat dreamlike appearance. This is a motif that appears frequently in paintings by Austrian symbolists. Klimt’s work is admired for its aesthetic, and as a result, viewers can discern symbols that connect them to the dream state.

The incorporation of European mother goddess iconography into Mother and Child has occasionally drawn attention. In other instances, viewers find it entertaining because it explores many facets of family life. His picture, The Family, depicts the bond between a family’s three individuals, with the mother holding the father tenderly while they both embrace the child.

“Mother And Child” Up Close

A piece of Mother and Child was created on a canvas with oil. The dimensions are 180 x 180 cm. When looking at the painting, it is impossible not to be amazed by the details and unique decorations. Mother and child, as already mentioned above, is part of the “Three ages of woman” artwork. Similarly to other pieces such as “The Kiss”, which was painted during Klimt’s “Golden Period,” “Mother and child” is created with metallic gold paint.

The period and the ornamental components of this piece further imply that it is a product of the Art Nouveau movement. The picture today can be found in the National Gallery of Modern Art, located in Rome.

The complete painting has three figures in it. However, the part that is known as “Mother and Child” only displayed two figures. The background lacks depth, giving it a rather two-dimensional appearance. The colors have a soothing effect since they are neutral. This piece displays Klimt’s frequent use of vivid themes. The two vertical auras that the women are in are separate.

The two younger characters are surrounded by a flowing blue aura with cool color patterns. The elderly woman is surrounded by an aura all to herself, and it is composed of a less flowing pattern with clearer design divisions. This aura’s warm, earthy tones stand out against the chilly hues of the other aura. The auras around the lady are slightly overlapping.

The head of the elderly lady appears in front of the right aura, while the leg of the young woman passes behind the left aura.

A youngster, who is the youngest figure, is linked to her mother, a young lady. Only these two are in contact. Additionally, their legs are covered in translucent blue cloth. Both the youngster and her mother are sleeping. The young lady is wearing flowers on her head to symbolize spring.

In contrast to the older woman, who is seated apart from the other two ladies, she has brilliant, abundant hair. She has her back to you and her head bowed. Her drooping skin, swollen abdomen, and visible veins are all telltale signs of aging. Her feet are visible because she is presented differently and not like the other two figures. This was done so the audience could witness the full ugliness of her age.

A beautiful depiction of motherhood, love for her kid, and the early years can be seen in the mother and child on the right side of the artwork. The mother gives her child an unwavering display of affection as she cradles the child in a cozy hug. The overwhelming fondness can be seen in the contented look on the sleeping child’s face.

The final phase of a woman’s existence is depicted on the left side of the painting by Klimt as an aged, worn-out woman who is wasting away. She is implying that she needs to conceal herself by placing her hand over her face, in addition to implying that she has had enough of life. The stark, dark-brown background that draws the spectator in represents the ground and depicts her body as if it is already partially buried.

A wonderful picture called “The Three Ages of Woman” has caused a lot of debate over the years among women who feel that it does not adequately represent the everlasting power of women. Many feminists think the painting’s underlying message is that being a mother when a woman is still a teenager is her most important function in life.

The sculpture by Auguste Rodin (1840–1917), The Old Courtesan, served as the inspiration for the figure of the elderly woman. The exhibition, which featured pieces by Rodin, the painter Giovanni Segantini, and Klinger, had a lasting impression on Klimt, who was thrilled to run into the sculptor the following year while the latter was in Vienna.

All in all, Gustav Klimt’s “Mother and Child” is an illustration of Klimt’s allegorical and symbolic works. Up till the time of his passing in 1918, he kept painting such themed pictures. Currently, the artwork is located in the Galleria Nazionale d’Arte Moderna, located in Rome.

In the picture, a young lady is holding a small daughter in her arms. Whereas, in the complete piece, an older woman stands next to them, with her head bent. This picture is a representation of womanhood. However, “Mother and Child” is a positive aspect of pretty heart-rending artwork.