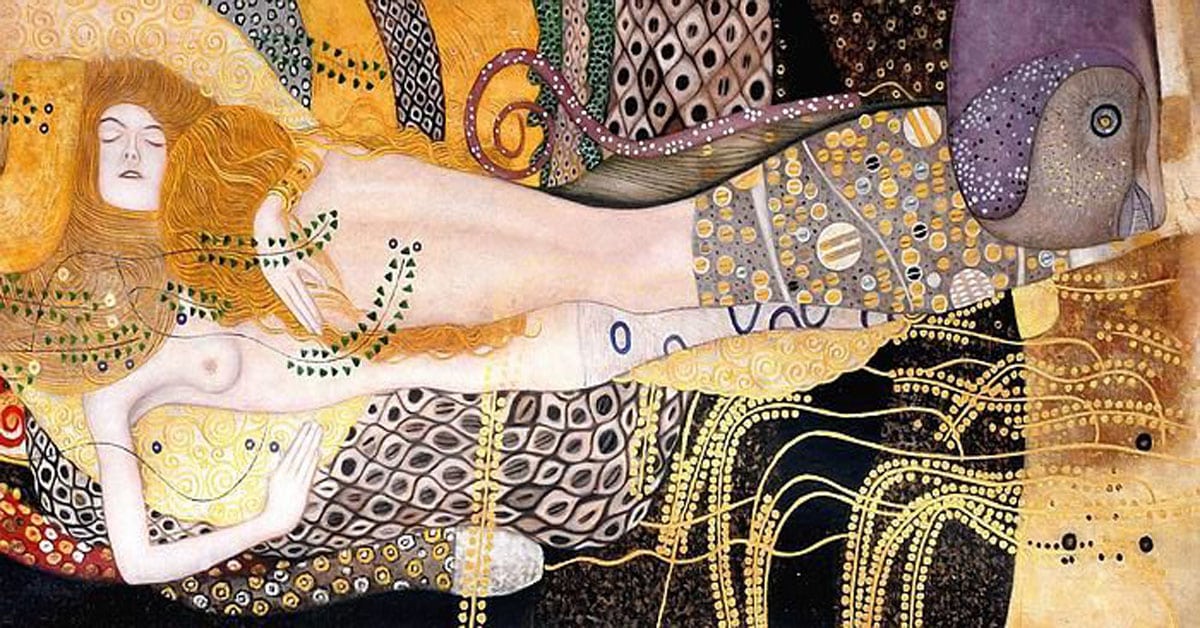 The lovely and meticulously rendered representations of ladies in Water Serpents I and II are typical of the outstanding Austrian artist – Gustav Klimt. A magical mix of light, vibrant, and dark colors makes the whole piece even more magnificent. The golden color of the women’s hair adds even more charm.

Although less well-known than the second in the series, Water Serpents I is nonetheless one of Klimt’s greatest works, and both have admirers all over the world. In fact, searches for these paintings in other languages on the internet include Wasserschlangen (German), Serpents d’eau, Sirènes I (French), Serpientes acuáticas (Spanish), and Bisce d’acqua (Italian). Even though most of them were given German names when they were first painted, the majority of online users will still use English names.

In two paintings known as Water Serpents I and II, Klimt returned to the topic of “sensual ladies in water.” Water Serpents I is not an oil painting, and its pale, odd coloring is somewhat influenced by the medium employed.

Apart from the addition of the gold paint and the green and gold-leaf thread twisted around the bodies of the ladies, there is not much altered from the early sketches Klimt used as references. His models’ unmistakably lesbian embrace may have been seen negatively if it had been presented as a straight image.

However, Klimt was able to exhibit the picture in Vienna without worrying about censorship thanks to a new title, an allegorical topic, the addition of the fish-like snake behind the bodies, and the decoration of every surface with gold and pattern.

Up until the time of his passing, Klimt’s work mostly consisted of portraits, landscapes, and allegories. However, during his latter phase, these well-known genres were treated with more emotional expression, and the pictures became less abstract.

The human kinds in myth and fairy tales were no longer concealed. They were shown to the observer as pure reality. Women Friends, a later picture by Klimt, shows lesbianism in a much more overt manner. A lover holding a blanket that partially conceals their nudity lays his head on a young girl who is nude with her lips apart.

Klimt’s Adele Bloch Bauer has the same aesthetic as Water Serpents I. He frequently utilized this well-known model in his chic portrait paintings, and she is depicted in that work. As a prelude to each of the finished paintings, Bloch-Bauer also created several pencil drawings.

Due to his attention to color and detail and the feminine, polished look of each image, both Water Serpents I paintings are extremely popular. Both paintings have a magical and endearing collection of images, and their high degree of detail ensures their endurance. Klimt frequently produced a large number of excellent pencil sketches in advance of his portrait paintings, and they are great works of art in their own right in the contemporary period, with his drawing abilities highly regarded.

The larger version of Water Serpents I, which some people prefer, merely focuses on a few key parts of the artwork and showcases the entire picture in all its splendor. The Water Serpents series contains only ladies to give it a more pleasingly feminine appearance that fits the articulate detail running throughout both works.

Water Serpents I preserves the painting’s core subject matter – two stunning women who are intertwined with the intricate background patterns – while providing more coverage of the painting’s specific details.

Gustav Klimt was an artist who maintained consistency throughout his career, and this expressive approach is evident throughout his body of work ever since moving beyond his early years when he was still just getting his artistic bearings.

For individuals who came across Water Serpents I first, there are many more works in his career that they are sure to enjoy as well because they will have obvious artistic parallels.

Many of Gustav Klimt’s paintings continue to receive significant media attention each year as a result of his extraordinarily successful career. There is no denying that The Kiss is his most well-known artwork.

Water Serpents I features two women. The sea serpent is a mythical and fabled aquatic creature that often resembles a huge snake. The ancient world was largely populated by people who believed in enormous animals that lived in the depths. There are several references in the Old Testament to a primeval conflict between God and a terrible foe that has alternatively been called Leviathan or Rahab.

Even though Leviathan is typically associated with a dragon-like beast, the word has also been used to refer to sea monsters generally. There are parallels to this conflict throughout the pre-Islamic Middle East.

In Babylonian literature, a fight between the deity Marduk and the multi-headed serpent-dragon Tiamat is described. In the Hittite myth, the weather god defeats the dragon Illuyankas. Similar to this, Canaanite poetry from ancient Ugarit’s Ras Shamra in northern Syria describes a conflict between the deity Baal and the Leviathan.

Sea serpents can transition between movements, making it easy for them to evade blows, do backflips, and engage in a variety of other athletic, gymnastic, and martial maneuvers. Sea serpents have strong bites because of their jaws and fangs. The Native American sea serpent represents defense, mystical strength, and rebirth. It is one of many cultures’ most potent symbols. Klimt knew those symbolic meanings of sea serpents, and it was one of the major inspirations for Water Serpents I.

When Gustav Klimt, his brother, and a friend founded the “Company of Artists“ in 1880, that was when he started working professionally. The group was frequently hired to create murals all across Vienna.

Even though the subject matter of these large-scale public paintings was initially classical and they have painted academically, several of them hinted at Klimt’s involvement with the Secessionist Movement and his future transition into his avant-garde Golden Phase. This Golden Phase was when Water Serpents I was created.

In 1897, Klimt helped form the Secessionist Movement. Klimt and other Secessionists offered Vienna’s modern artists a forum to promote their work by rejecting the city’s historically conventional art scene. The Symbolist movement, which Klimt developed in response to the Art Nouveau and Arts and Crafts movements, was inspired by and made possible by this freeing movement.

His attitude to subject matter evolved along with his increasingly contemporary painting style. Klimt started using gold leaf in his artwork in the early years of the movement, ushering in the most prosperous and glittering phase of his career.

Water Serpents I belongs to Klimt’s Golden Period. This is when Gustav used his unique method of painting. Oil on canvas and amazing golden, vibrant colors give the picture a beautiful aesthetic appearance. Other very interesting paintings done by Gustav Klimt in his “Golden era” are Pallas Athene, Judith I, Stoclet Frieze, The Kiss, and many more.

The painting Pallas Athene is frequently recognized as Klimt’s first creation during his Golden Period. This 1898 oil painting of the Greek goddess Athena shows her in armor and a rebellious stance. The dramatic use of gold and the presence of patterns in this artwork, which retains the classical influence seen in his earlier works, are signs of Klimt’s future work.

Judith I is another early illustration from this time. In this picture, like many of his later works, a woman’s portrait, in this case, Judith, a biblical character framed for killing an invader named Holofernes, is framed by ornamental patterns and set on a backdrop of gold. Similar to this, Klimt also paints female figures with sensual overtones, a style that would later become fundamental to his work at this time.

Klimt was frequently hired to create portraits of upper-class women in the Austrian capital since he was a successful painter and a well-known figure in the city’s contemporary art scene. The Portrait of Adele Bloch-Bauer I, which portrays the wife of a rich Jewish banker, is the most well-known representation of this subject. The striking use of gold in this painting, which depicts one of Klimt’s current contemporaries, gives it an ethereal appearance evocative of a Byzantine mosaic, demonstrating the everlasting nature of the “new Viennese lady.”

The three lavish mosaics known as the Stoclet Frieze were made by Klimt between 1905 and 1911 for the dining room of the Stoclet House in Brussels. The Tree of Life, a stylized representation of a tree with wavy, spiraling branches, elaborate patterning, and old art-inspired symbolic elements, serves as the centerpiece of the entire set.

A graceful dancer and a pair who remarkably resemble the lovers shown in The Kiss are among the figures who accompany the tree. In his sketches for the frieze, Klimt accentuated the scene with gold. Just like in The Kiss, Water Serpents I is done with gold leaf.