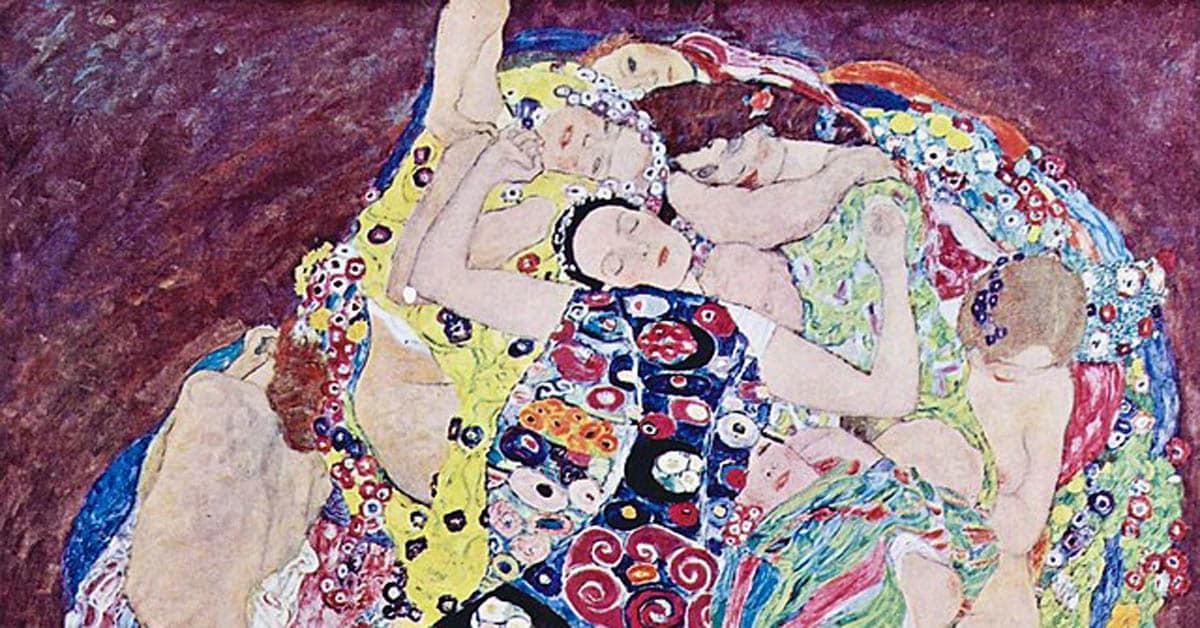 The painting “The Maiden,” which is regarded as one of Gustav Klimt’s most enduring works, is not only exquisite in its aesthetic fulfillment but also replete with meaning. It is a perfect example of Klimt’s traditional use of ornamental details and vibrant color, as well as his incorporation of ornaments mixed into allegories, in this case, ones about fertility and change.

Gustav Klimt is most known for his very detailed paintings, several of which have been classified as erotica (particularly “The Maiden”), sparking intense debate throughout his career. Nevertheless, he was able to establish himself as one of Vienna’s most significant painters. Klimt’s paintings have so far fetched some of the highest sums ever recorded for a single item of art.

In this article below, we will explore and learn more about Klimt’s one of the most famous art pieces – The Maiden.

The Author of The Maiden

Vienna was the birthplace of Gustav Klimt, who rose to prominence during the city’s most vibrant creative era. The School of Applied Arts was where Klimt got his education.  And after that, he pursued his career as a decorative painter. He was the son of a jeweler. His plans for the Burgtheater and the Kunsthistorisches Museum were initially successful, but his developing interest in avant-garde art threatened to jeopardize future commissions.

Gustav Klimt left the Vienna Artists’ Association in 1897 and created the Vienna Secession, serving as its first president, in the face of government resistance. A project he abandoned in 1905, his decorations for the university, were the subject of prolonged disagreements at the same time.

Hans Makart, at the time Vienna’s preeminent history painter, was admired by him. Klimt immediately adopted the conservative trainer’s guiding concepts. His early work might be categorized as scholarly.

His brother Ernst, who would go on to become an engraver like his father, joined the school in 1877 as well. In 1880, Klimt started working with his friend Franz Matsch and two brothers. Their group, which they dubbed the “Company of Artists,” had won several assignments. Additionally, they assisted their teacher with the mural painting at Vienna’s Kunsthistorisches Museum.

For his contributions to the murals painted at the Burgtheater in Vienna, Emperor Franz Josef I of Austria awarded Klimt the Golden Order of Merit in 1888. Additionally, he was made an honorary associate of the Universities of Vienna and Munich.

Klimt had to take on financial responsibilities for his father’s and brother’s families after his brother Ernst and father both passed away in 1892. His creative perspective was also impacted by the tragedy, and he immediately began to develop a new, unique style.

Exploring “The Maiden” Up Close

The Maiden is a symbolic artwork in the Art Nouveau or contemporary style. It is an oil painting on canvas. It is 190 by 200 cm (74.07 by 78.8 inches) in size. The piece is known by two different names: “The Virgin” and “The Maiden.” The masterpiece was created between the years of 1912 and 1913 on canvas and oil. Today, this amazing piece of art is kept in the National Gallery in Prague.

Perhaps the sleeping woman in the center of The Maiden image sees opportunities in the six other ladies. This is one possible way to describe the group of women in the Maiden painting who are dressed in organically patterned scarves and dresses and who resembles a cloud. The Maiden’s elaborately curved dressing robe represents fertility, advancing years, and the world’s ongoing progress.

Gustav Klimt’s “The Maiden” captures the dreamy sensuality of an impressionable young girl. The patchwork quilt of ladies encircling the sleeping center girl represents the dream she is having about the possibilities for her future.

Klimt’s constellation of ladies is formed like a cloud and is covered in flower garlands and colorfully patterned scarves. The Maiden’s long garment is adorned in spirals that stand for fertility and the universe’s constant change and evolution. The Classical Greek, Byzantine mosaics, and Medieval styles were among Klimt’s many inspirations.

The author chose complex colorful patterns that gave the piece movement and fluidity, drawing inspiration from the emotionally evocative works of Matisse and Toulouse-Lautrec. Klimt saw in the feminine form the fundamental purity of human desires, which were frequently repressed by the orthodox civilizations of his day.

One of Klimt’s final works finished before his death in 1918 was “The Maiden.” He left behind a picture entitled “The Bride,” which is still incomplete. It was intended to be a complement to this picture. The bride-to-be in “The Bride” wakes up from her dream.

The profusion of flowers in the painting represents the development of femininity. Seven ladies are shown intertwined in the picture. Every lady embodies a specific era of life. The cyclical-shaped depictions of love, sexuality, and rebirth in the artwork touch on several different aspects of human existence.

Cost of “The Maiden”

The 1913 painting The Maiden was a special purchase from the Deutschböhmischer Künstlerbund exhibition held in January and February 1914 at the Rudolfinum Gallery in Prague, when eleven paintings and a collection of Klimt sketches were on show.

Klimt was haggled over by Baron F. Wiesner, an agent for the Modern Gallery, due to the item’s expensive cost (26,000 crowns). In the end, the Gallery bought the painting in 1914, a year after it was produced, for 20,000 crowns.

Das Werk Gustav Klimts, the sole folio set created during Klimt’s lifetime, was first published by H. O. Klimt’s most significant paintings (1893–1913) were represented by fifty pictures that were collotype lithographed and placed on a thick, cream-colored wove paper with deckled edges.

In total, Klimt’s fifty prints were categorized into several groups. The first of those groups is Allegorical, Which includes The Maiden and The Golden Knight. The second one is Erotic-Symbolist, which includes The kiss, Water Serpents I and II. The third group includes Landscapes and Klimt’s Farm Garden with Sunflowers belonging to that group.

The next one is mythical or biblical, with Danae, Judish, the Head of Holofernes, and Pallas Athena in it. And finally, the last group includes Emilie Flöge and Portraits.

There always appear to be instances of an eroticizing intention to make Gustav Klimt’s art come alive again or even go beyond, like in The Maiden, both during his lifetime and after. According to some authors, the display of sexual desire and pleasure may be seen as a constant social, political, and cultural force.

As a result, Gustav Klimt is regarded as a painter who made a significant contribution to the liberation of women and the recalling of the lost significance of sexual base and as a well-known critic of his day and its archaic cultural standards.

It is believed that Gustav Klimt’s greatest contribution to art was his release of human depiction from the constraints of morality and opportunism. Additionally, by using his unique style, he was able to convey the essence of a person’s existence through images that display a timeless foundation for a person’s potential as an individual. Gustav Klimt might be seen as a mentalist who examined psychic phenomena and pursued goals like those of Sigmund Freud, a contemporary of his time.

Klimt overcame a poor upbringing to become an artist who had a big impact on the Art Nouveau and Viennese Secession movements. His intricate, overtly sensual artwork covered topics like rebirth, love, and death.

He sought to write the future of humans as organically evolving exotic beings on their physical shapes. Klimt was a well-known critic of his day and its archaic cultural values and is credited with liberating the female soul.

Landscapes, allegorical compositions, ornamental paintings, and poster designs were among Klimt’s early artistic endeavors. The artist was awarded several public commissions, such as those for Vienna’s Burgtheater and Kunsthistorisches Museum. However, there were many discrepancies in how his work was received by the general population. He received the gold prize at the 1900 Paris World’s Fair, but in Vienna, he received criticism for his extreme sensuality.

The tragic woman, the femme fatale, with all of her beauty, mystique, and originality as well as her treachery and danger, was the main focus of Art Nouveau. Klimt frequently depicts sensuality and sorrow in his female protagonists, as shown in his 1901 painting Judith and the Head of Holofernes. Klimt was well-known and successful across all of Europe as a portrait painter. In Berlin, Munich, Venice, and Rome, he had exhibitions. Eleven of his pieces were displayed in Prague in 1914.

The Maiden has a unique place in Klimt’s body of work. The link between beauty and transience, youth and mortality, the celebration of youthful life, and the phenomenon of a woman’s existence are major themes of the Secession.

It was painted by Klimt in his latter creative phase when the subject of the “femme fatale” gave way to the innocent girl’s dreamy sensuality. His quick use of vivid colors and styled plenary abbreviations were paired with his masterful sketching. One of Klimt’s best depictions of sexuality may be seen in “The Maiden.”