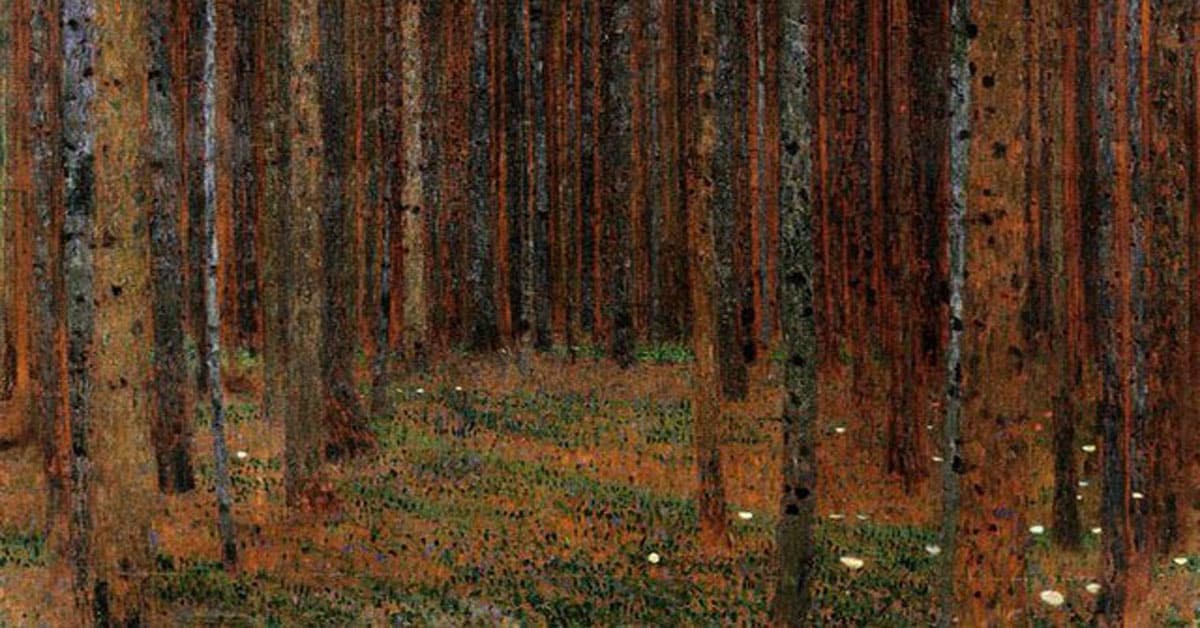 The maestro of the Vienna Secession, Gustav Klimt, is renowned for his golden paintings of fantastical animals, opulent ornamentation, and stunning ladies. However, he also had a lesser-known side known as the Waldschrat, a lone resident of the woods.

Between 1901 and 1904, Klimt produced several breathtaking paintings of various types of wood, sometimes in a semi-abstract or realistic style. One of them is Tannenwald, an amazing and mystic work that will be discussed below.

Klimt was a founder member of the Vienna Secession, an artistic movement that dispensed with the Austrian Academy of Arts’ conventional, classicalist ideals in favor of fresher trends and up-and-coming creators.

Description Of The Artwork

Tannenwald’s pictures were painted in several series. Tannenwald is a German word that translates as “for woodland.” At around this point in his career, the artist also painted different kinds of trees. In order to give the painting a sense of depth, the artist meticulously arranges the trees in groups. Those groups are located on either side of the canvas, and a little hole in the center is often seen.

Tannenwald, like many of Klimt’s landscape paintings, was created on a square canvas, a somewhat uncommon choice for landscape painting, but one that shows the artist’s desire to create works that were ideal for exhibition at the time.

Life-related themes frequently appeared in Klimt’s allegorical paintings, and this topic also appeared in his landscapes. This collection of woodland paintings comes together to create a captivating profile of art like Monet’s Haystacks, which also explored the effects of time and light on the world around us.

In an otherwise extremely soothing artwork, the trunks have a pointillist approach to detail. There is also a glimmer of the sky, signifying the outside world. The trees’ sharply defined narrowness and flawless verticality give them an almost abstract form, which is what Klimt probably meant when he chose the kinds of trees he would employ in this series.

Tannenwald II, which was created shortly after the Tannenwald I piece and depicts a landscape that is extremely similar to this one, was closely related to the first piece in the series but lacked the clearing and more detail on the fir trees. Both works of art were finished in 1901.

While he was near Lake Attersee, Klimt painted a variety of beech forests. He shortens the horizon in many of his paintings of trees, which gives the forest in the foreground and middle ground a greater feeling of depth and density.

This method enables the observer to concentrate on the forest and trees rather than whatever may be beyond. In several of these paintings, he used brief, delicate brushstrokes to give the patterns a detailed, impressionist appearance while also conveying the variety of natural components that may be found on the forest floor. It just creates the feeling of being in the jungle.

Around that time, Gustav Klimt started painting Tannenwald. He became known among the locals of Litzlberg for spending days at a time traversing the woods. In the depths of nature, he is in search of the ideal location that would inspire him to paint.

While on vacation with Emilie Floge in the Austrian Alps, Klimt continued to be inspired by the patterned patterns produced by pointillism. Like all of his landscape paintings, this one is framed by a square composition, which mystics and theosophists view as a representation of ideal harmony and cosmic equilibrium. In Tannenwald, the artist-priest is at one with nature and in prayerful meditation, connecting with the divine.

Klimt was similarly influenced by nature, as were the Romantics he studied. However, he also reveals how Paul Gauguin’s Post-Impressionist works affected him, equating Gauguin’s South Sea Island “life-frieze” paintings with a musical poem in a rarely recorded observation. While putting Beethoven and Schiller to visual music in The Beethoven Frieze, Klimt was fascinated by this project. But if Klimt’s autonomous world is the beauty of the surrounding landscape, Gauguin’s transcendentalism is fulfilled through exotic, idealized beings.

It is widely accepted that several central European nations, including Albrecht Altdorfer, the genre’s oldest known practitioner, incorporated forests into their allegorical art. As early as the fifteenth century, he would depict lofty pine trees rising into the sky.

Klimt may have drawn inspiration from Altdorfer for his use of trees in his artwork, but he would also have been familiar with many other well-known landscape artists who have emerged subsequently.

Gustav Klimt was mainly famous for his “Golden Leaf” paintings, which typically included women. However, he also has some of the most unique and beautiful tree artwork. In particular, the trees that are seen in his paintings are fir, birch, and beech trees.

His less well-known identity was that of the Waldschrat, a lonesome wood dweller. The majority of the tree-themed artwork was done between the years 1901 and 1904. During those years, he developed a series of paintings to highlight the importance of trees in the natural world, including Tannenwald.

When he was staying at a summer resort in Litzlberg on Lake Attersee, Klimt began each day at six o’clock with a leisurely walk in the woods. The results of these strolls are astounding. The artist must have felt at ease in the outdoors. Instead of depicting the enigmatic, dark center of the forest, he decided to paint a serene fall scene in this instance.

Paintings of various kinds of wood are included in the collection, and the style spans from semi-abstract to more overtly figurative works. Tannenwald (1901), by Gustav Klimt, is abstract in style. However, it has the beauty of the orange and green color scheme and the small glimmers of light. All those color patterns give the picture depth and create curiosity about what lies beyond what makes it so successful.

Birch woodlands were the subjects of a few paintings by Klimt. Young birches, which represent springtime and youth’s quick development, were a common topic for artists. a symbolism that nicely complemented the secessionists’ worldview. Some researchers believe that at around 40 years old at the time of these paintings’ creation, Klimt may have been reflecting on his childhood with nostalgia.

Klimt frequently used square canvases for his paintings of trees because it was a simple geometric shape and one of the primary decorative themes of the Vienna Secession. Each dot of paint on the flowering branches represents a single leaf, a blooming flower, or a piece of fruit.

The flat, flickering field of color is reminiscent of Byzantine mosaics and Post-Impressionist paintings. In those paintings, a forest or a solitary tree crown looks like a priceless carpet. It forms a seamless whole. Even after gifting the Pear Tree to Emilie Flöge, his muse and potential mistress, in 1903, Klimt kept adding the dabs.

The absence of the sky in Klimt’s treescapes, which also include Tannenwald, is another distinguishing feature. Only little gaps in the upper portions of the paintings hint at it. He had moved past his gold phase at this stage in his career and, like many of his contemporaries, was influenced by Impressionism and Neo-Impressionism. Klimt, however, provided depth to the landscape in the picture by employing vertical brush strokes, so we don’t feel the rigidity of Signac and Seurat’s works.

Other than Tannenwald, Klimt has created some amazing tree paintings. Among the works on the list, one of the most famous and expensive is The Stoclet Frieze. The Stoclet Frieze consists of three panels, two of which are positioned on opposing walls and nearly mirror each other. Each image includes the Tree of Life and at least one other standing person. The third piece is situated between them on the wall, is taller and thinner, and is decorated with a very abstract geometric figure.

The Tree of Life is an ancient symbol that can be found in mythology. Many religious narratives are based on the Tree of Life, which Gustav Klimt depicted in his artwork. In his illustration, a tree is depicted with sprawling branches that stretch upward in a way that symbolizes the continuation of life and roots that go below, signifying a link to the soil.

Many have taken The Tree of Life’s branches in Klimt’s frieze to twist and entwine, which many have taken as a representation of the intricacy of life. Klimt refers to the standing female figure in one of the frieze’s panels as “Expectation.” Her posture is strikingly reminiscent of Egyptian art, a significant inspiration for Klimt’s work.

Tannenwald is Gustav Klimt’s unique and beautiful artwork. He enjoyed being in nature and put all his feelings into the paintings. He created numerous tree-themed paintings, and each of them has its own significant meaning and a mystery beneath it. Tannenwald is one of those paintings. When looking at this masterpiece, it is impossible not to wonder what may be beneath those tall trees.