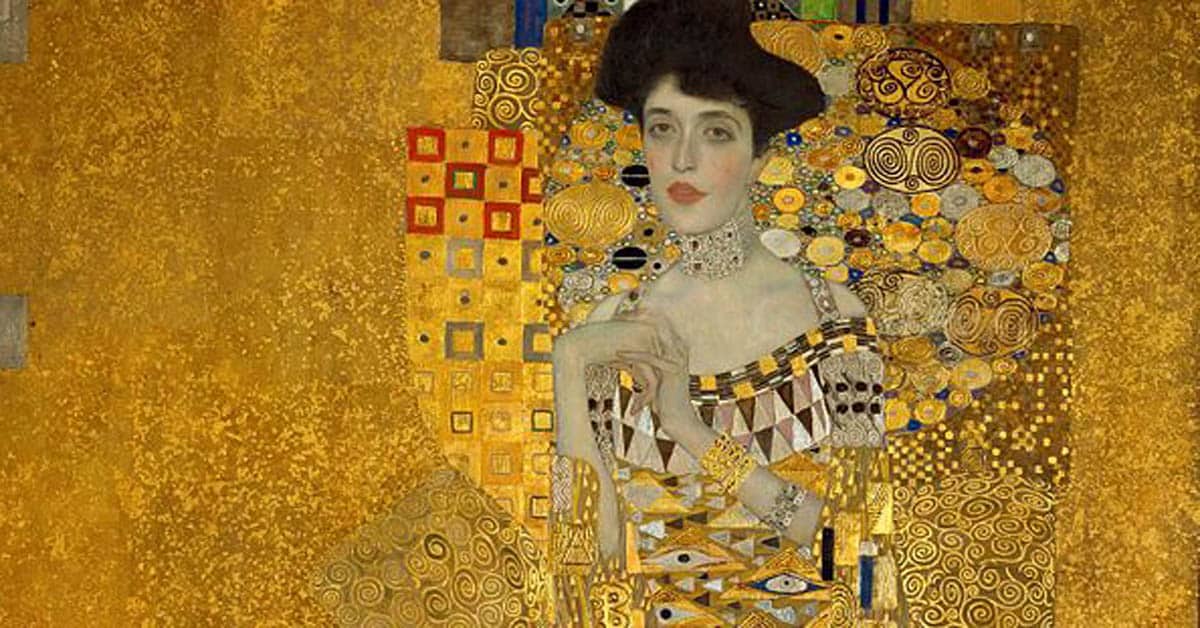 There’s no doubt that Klimt was influenced by Egyptian art when he painted the Woman in Gold, who is actually Ferdinand Bloch’s wife. Bauer gave Klimt orders to make portraits of Adele, his wife, twice. This work was created at the pinnacle of Klimt’s career.

The picture stands out for its blend of naturalism in the portrayal of the face and hands with ornate embellishment on the backdrop, chair, and outfit. The way the design cuts over the shoulders and forearms gives the image of being mutilated, much like Judith and the Head of Holofernes.

Since Adele is the focus of both of these pieces, it is challenging to avoid looking for a psychological explanation for the separation of the head and body. Some even believe that Adele and Klimt had a closer relationship.

Briefly About The Author

In 1862, Gustav Klimt was born in Austria-Baumgarten, a town close to Vienna. He studied at the Vienna School of Arts and Crafts, also known as Kunstgewerbeschule Wien, before beginning to work on commissions in 1879 alongside his brother Ernst and a classmate named Franz von Matsch.

They painted interior murals and ceilings in significant public structures throughout the next ten years, such as the Burgtheater, the Kunsthistorisches Museum, and the University of Vienna’s Great Hall. They also completed a number of private portrait projects.

During the Belle Époque, when Klimt lived and worked in Vienna, the city “made an intense and permanent contribution to the history of contemporary art.” He was affected by European avant-garde art of the 1890s, particularly the paintings of Fernand Khnopff, Jan Toorop, and Aubrey Beardsley.

Klimt served as the president and a founding member of the Vienna Secession, a group of artists who sought to rebel against what they perceived as the dominant conservatism of the Viennese Künstlerhaus, in 1897.

By 1900, he was the portrait painter of choice for the wives of the mostly Jewish Viennese bourgeoisie, a new class of self-made manufacturers who were “purchasing the inventive new art that state museums refused.”

The Byzantine or Golden Phase began in 1898. Klimt was experimenting with the style and gilding his works with gold leaf. This period was influenced artistically by the Arts and Crafts movement and Art Nouveau. Klimt had started utilizing gold with his 1890 portrait of the musician Joseph Pembauer, but Pallas Athene was his first piece to include a “golden subject” in 1898. It is believed that Klimt applied gold to give his subjects a holy or supernatural character.

Who Is Woman In Gold

Have you ever heard anything about the story of Jewish woman Adele Bloch-Bauer? Well, the truth is that the mysterious Woman in Gold is actually a Viennese socialite who was frequently referred to as “the Austrian Mona Lisa.”

Adele Bauer came from a well-to-do Jewish family in Vienna. Her father was the general director of the Oriental Railway and a director of the Wiener Bankverein, the seventh-largest bank in Austria-Hungary. Adele and Klimt may have started a romance when they first met in the late 1890s.

On the subject of an affair between Adele (Woman in Gold) and Klimt, opinions are split. Some state that there is no proof that their connection was more than a friendship. Author Frank Whitford notes that some of Klimt’s early sketches for The Kiss had a bearded figure that could have been a self-portrait. Whitford calls the female partner an “idealized picture of Adele.”

According to Whitford, the only piece was “Woman in Gold,” and she was donning a richly embellished choker that Ferdinand had given her. Whitford calls this picture “Klimt’s most sensual artwork.“

Adele passed away at the age of 43 from meningitis in January 1925. Adele specified in her will that she wanted her Klimt portrait to be given to Vienna’s Austrian Gallery, which is now the Belvedere.

Painting Of Woman In Gold Up Close

Ferdinand Bloch-Bauer hired Gustav Klimt in order to “create a painting of his wife.” This happened in the middle of 1903. He intended to give it to Adele’s parents as a gift for their wedding. Ferdinand bought his first Klimt work from the artist Buchenwald in 1903. When they acquired 16 Klimt works, the Bloch-Bauers bought some of the sketches he had made of Adele.

Klimt went to see the Basilica of San Vitale in December 1903. He went there with the artist Maximilian Lenz.  There they studied the early-Christian Byzantine gold-ground mosaics of Justinian I and his wife, Empress Theodora. The mosaics left a profoundly influential effect on Klimt. The brilliance and rigid embellishment of his paintings result from this.

The picture is oil painted on canvas that is 138 by 138 cm (54 by 54 in) in size. It also contains silver and gold leaves. “Woman in Gold,” Adele Bloch-Bauer, is seen in the painting seated on a golden throne or chair against a background of golden stars. The same jeweled choker that Klimt used in the Judith artwork is worn around her neck. She is dressed in a small, triangular-shaped outfit of gold made up of rectilinear shapes.

Oil paintings of Adele’s hair, face, décolletage, and hands make up less than a quarter of the whole composition. It doesn’t reveal much about the sitter’s personality. The painting seems more like a holy icon than a secular portrait because the gold backdrop removes Woman in Gold by Adele Bloch-Bauer from the terrestrial plane and transforms it into an apparition from a dream of sensuality and self-indulgence. The gold gives Adele the appearance of being melancholy and fragile, unapproachable, aloof, and yet rapt.

Important Details Of The “Woman in Gold”

Klimt portrayed Adele wearing flowy clothes in both the preliminary drawings and the completed painting. These stylish garments were most likely created at the Schwestern Flöge Fashion Salon, a posh store run by Emilie Flöge, Klimt’s sister-in-law, and her sisters Helene and Paulin.

Adele is depicted by Klimt in an indeterminate position. It’s not apparent if she’s standing or sitting on an armchair with a sinuous spiral covering. Her face is encircled by a golden halo that is richly decorated. The sensuality of the woman in gold depicted in the portrait is conveyed by her flushed cheeks and rouged lips.

Woman in Gold, Adele Bloch-Bauer, is dressed up with priceless jewelry, including a diamond necklace that Ferdinan had given her as a wedding gift. All-seeing eye designs and golden triangles decorate her gown. They may have been added for specific reasons, given Adele’s lifetime of health problems.

Her initials “AB,” elevated in low relief, is embroidered on the gauzy cloak that envelops her. Adele’s hands are linked in an odd way to hide a deformed finger that causes her much anxiety. The heavily decorated surface gives off a flat impression as gold and silver glitter over it.

Formally, the composition is balanced by a little area of green in the lower left, but there is no indication of the depth of field. Klimt’s portraiture is characterized by the realistic appearance of just her physical body.

Woman in Gold holds the unique distinction of being the only subject that Klimt painted twice. The highest reported price paid for a painting was $135 million in 2006 when Ronald Lauder purchased Portrait of Adele Bloch-Bauer I for the Neue Galerie in New York. It surpassed Picasso‘s 1905 “Boy with a Pipe,” which was sold for $104 million.

At the 1907 Mannheim International Art Show, Klimt displayed his picture next to the Portrait of Fritza Riedler, painted in 1906. The two paintings received unfavorable reviews from several critics who labeled them as “mosaic-like wall grotesqueries,” “bizarre,” “absurdities,” and “vulgarities.”

The picture was displayed in 1908 at the Kunstschau in Vienna, where it received mixed reviews.

The Wiener Allgemeine Zeitung reviewer who chose to remain anonymous referred to the painting as “an idol in a gilded shrine,” while Eduard Pötzl called it “Mehr Blech als Bloch,” which translates as “more brass than Bloch.” Some reviewers objected to the loss of the sitter’s uniqueness, while others accused Klimt of threatening the autonomy of art.

After reviewing the history and hidden details about Gustav Klimt’s masterpiece “Women in Gold,” hopefully, you acknowledge why this artwork is praised so much by art admirers all over the world.

All in all, the Woman in Gold, or Adele Bloch-Bauer I, a portrait by Gustav Klimt, painted in 1907, is his most well-known work and the apex of his “Golden Style.” This masterpiece contains allusions to Africa, Asia, Byzantium, and Egypt, and might be viewed as a secular icon. The artwork took four years to complete for Klimt, who started work on it that winter and produced a ton of drawings and sketches along the way.