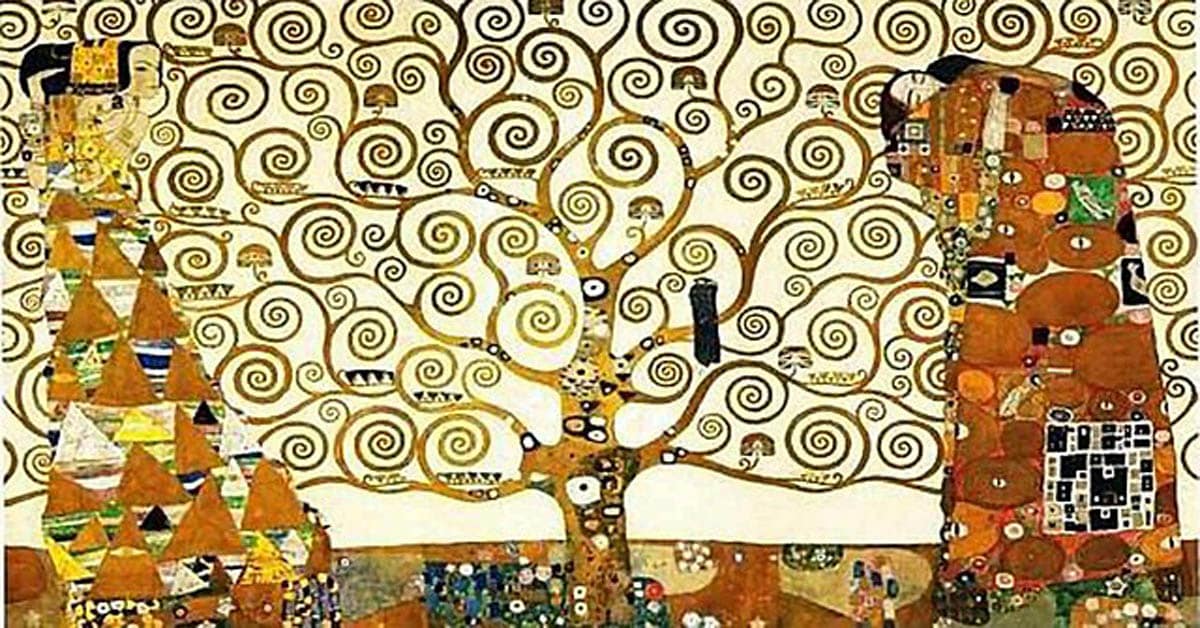 The Tree of Life, one of Gustav Klimt’s best-known works from a long and distinguished career, was produced during the artist’s Golden Period. This masterpiece carries on the artist’s symbolic approach through a motif that frequently appears in historical texts and symbolizes growth and life.

Even people who are unfamiliar with much of this artist’s work will be able to immediately recognize the Tree of Life, Stoclet Frieze painting due to the exquisite decorations on the tree’s branches.

For those who’d like to explore Klimt’s “Tree of Life” up close, we’ll discuss the details and interesting facts about this unique creation in this article.

Briefly About The Author – Gustav Klimt

Gustav Klimt was born in Austria in the year 1862. As he grew older, Klimt became interested in ceilings and murals. While Klimt’s sibling chose to follow in his father’s footsteps and become a gold engraver, he focused on his passion for design and painting until he became well-known and began to paint professionally.

Klimt’s painting style started to change as he got older and experienced personal sorrow. His father and brother passed away in the same year, which greatly influenced Klimt’s life.  He had produced beautiful but unremarkable historical-themed works of art.

Then he switched to figurative painting. He had a strong passion for psychology and wanted to paint more images of women. In 1897, a group of painters assembled in Vienna, Austria, to create the new group known as the Vienna Secessionists.

Artists that joined the Vienna Secessionists were tired of looking at and depicting genuine circumstances in the same manner as earlier generations and were fed up with popular art. They desire something fresh. They have the same intention as Klimt to use symbols in their artwork. As a part of this group of painters, Klimt started experimenting with this novel approach to painting.

He began to paint more portraits of ladies, although he also produced landscapes. In 1908, Klimt left the Vienna Secession movement and started developing a new painting style using gold leaf. These pieces made Klimt famous in the modern era. His paintings needed a lot of time and a steady hand to apply tiny gold leaf specks.

Both academia and the general public see Gustav Klimt as a recognized artist and are drawn to various aspects of his work. His career will never fade from public view for very long, thanks to several iconic paintings, and those who take the effort to delve further into his body of work are rarely let down. However, less well-known than his oil paintings like the Tree of Life and The Kiss, Klimt’s sketches are just as significant and accomplished.

Due to their significance as key works in European art history, this and Klimt’s other masterpiece, The Kiss, continue to be the two most well-known works of art to have ever originated from Austria.

While Gustav Klimt is most renowned for his intricate, brilliant paintings that can illuminate a room on their own, each of these paintings is really a series of extremely accomplished drawings for the artist is also widely recognized for.

Those who go further into his work will quickly discover a variety of stunning figurative sketches that he produced throughout his career, frequently serving as drafts for the later, more well-known paintings. In addition to The Tree of Life and The Kiss, which are discussed on this website in detail, Gustav Klimt also created a number of other outstanding oil paintings and drawings.

The Stoclet Frieze is a stunning mosaic frieze created between 1905 and 1911 by Austrian Symbolist artist Gustav Klimt. The three panels are called “Expectation” (on the left), “The Tree of Life” (in the middle), and “Fulfillment,” and they comprise a sequence (on the right). It was created during Klimt’s “Golden Phase,” when he frequently used gold leaf to adorn his artwork.

In order to decorate three walls of the Stoclet Palace’s main dining room, Klimt produced “The Stoclet Frieze.” The Belgian financier Adolphe Stoclet and his wife Suzanne commissioned Austrian architect Josef Hoffmann to construct this mansion as their private residence in Brussels. In order to design and construct their new home, Stoclet and his wife enlisted the help of the best artists in their respective disciplines.

The frieze was created by Klimt using marble, gold tiles, pearls, and pottery. This piece, which exudes Art Nouveau’s playfulness, was described by Klimt as “perhaps the ultimate step of my evolution of adornment.”

The ancient symbolism of the Tree Of Life, which has been used in theology, philosophy, and mythology for thousands of years, is addressed by Klimt in this work. This idea originated with the ancient Egyptians, and it appears that Klimt was influenced by them when creating this work. The Tree Of Life represents how everything, including heaven, hell, earth, life, and death, is interconnected.

A woman wearing a pattern on her clothing appears to have drawn inspiration from ancient Egyptian art in the “Expectation” Panel. Her garment is quite ornate and becomes bigger as it gets closer to the ground. In the “Fulfillment” panel, a pair is hugged tightly. Their attire seemed to bind them together. The figurines’ patterned attire contains details that resemble those in the tree.

The Stoclet family continues to hold the home today, and in 2009 it was included in the UNESCO World Heritage List. Unfortunately, the public cannot access it since it is still private. However, the Austrian Museum of Applied Arts/Contemporary Art in Vienna, Austria, has a number of studies and drafts for the final mosaic, “The Stoclet Frieze,” on exhibit.

The Idea Behind Tree Of Life

The Tree of Life was created in 1909. This masterpiece can be found in the Museum of Applied Arts in Vienna. The work is a concept for a trilogy of mosaics that Klimt planned to make between 1905 and 1911 for a commission at the Palais Stoclet in Brussels, Belgium.

In his workshop, Klimt worked on the golden tree that served as the image’s core motif for over six years. The artist purposefully chose the hue “golden,” which stands for “life.” The remainder serves as the golden tree’s limbs, with this being the image’s dominant hue.

The artist made the murals in his latter work period and included spinning Trees of Life, a rising feminine figure, and intertwined lovers. They embellish two figural parts that face each other and three sides of the eating room of the Palais. Stoclet Frieze’s Tree of Life is a symbolist piece of art. It is a significant piece of Art Nouveau.

The Tree of Life is shown strongly and originally in Gustav Klimt’s painting. The swaying branches evoke legendary imagery and allude to life’s inevitable progression. The tangle of solid branches, rambling vines, and fine threads formed by the branches’ twisting, twirling, swirling, spiraling, and undulating motions symbolizes the complexity of life.

The idea of the Tree Of Life is described as a metaphor. It has symbolic meaning in many philosophies, civilizations, and religions. The tree has branches that reach the sky. The roots reach into the ground, creating a connection between heaven and earth.

In the Tree Of Life, Klimt also creates a connection with the underworld and represents the ultimate determinism that controls every living thing from conception to eventual decay and returns to the earth.

In the artwork, many view Stoclet Frieze as a symbol of unity, but it also represents patriarchal and feminine authority to some. The feminine in the image stands for development, care, and sustenance, while phallic symbols signify the man. This special connection is the source of life. Others think the artwork embodies the fusion of man’s three qualities: strength, wisdom, and beauty.

Man’s constant urge to expand is compared to the tree reaching for the sky, even if his roots are securely rooted in the earth. In the Tree of Life, Stoclet Frieze invites the viewer to take their time admiring the piece and understanding its meaning, which is one of its most appealing features.

While the artist uses a variety of symbols, gold paint, and other lavish techniques to create a magical realm, the presence of a lone blackbird draws the viewer’s eye to the painting’s center. The blackbird serves as a reminder that everything has a beginning and an end since many cultures have historically thought of it as an emblem of death.

Gustav Klimt’s Tree of Life is among his most well-known pieces, along with others like Water Serpents II and the Portrait of Adele Bloch-Bauer.

The Tree of Life is a major subject outside of Gustav Klimt since it serves as a crucial symbol for many religious belief systems. This picture is a representation of the connection of nature’s constituent parts, which is why many religions and civilizations have adopted it.

For Klimt’s followers, the painting has added significance because it is the only landscape the artist created during his Golden Period. Klimt created opulent artworks at this time by fusing gold paint and oil painting techniques.