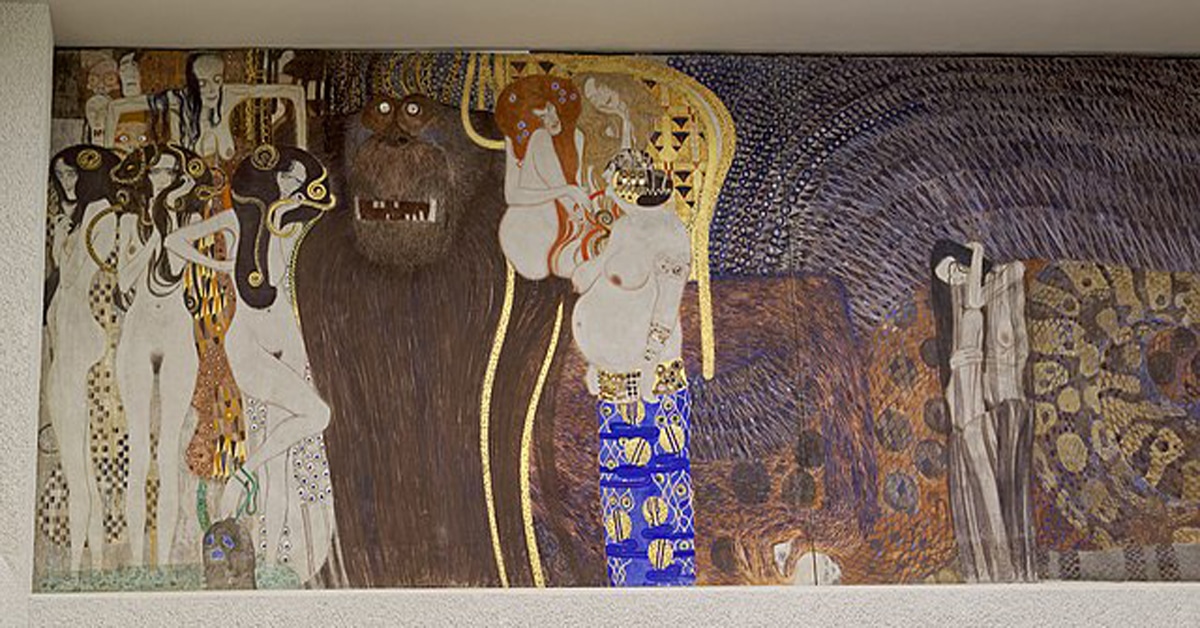 Gustav Klimt has been famous for creating images of exquisite female portraiture, seductive and perilous settings, and ornamental themes with gold accents. But if you’ve ever seen Vienna’s renowned Secession building, which is now a gallery for modern art, you could also picture a massive gorilla wearing a turban. The gorilla is a mythical giant named Typhoeus and is a significant part of an artwork – Beethoven Frieze.

The frieze illustrates psychological human longing that is finally satiated by personal and collective exploration of the beauty of the arts, together with love and connection.

Briefly About An Artist

Klimt was an Austrian painter who primarily focused on the female body in all of its manifestations. A large portion of his work is distinguished by overt sexuality and the sensuality of the female form. He became well-known for his paintings, enormous murals, and, subsequently, his exquisite drawings of naked women.

Although he never painted a self-portrait, he did create many highly unusual landscapes. He once said, “Whoever wants to know something about me… needs to look attentively at my images.” The topic neither attracted him nor did he believe it should.

The Vienna Secessionists were a group of painters that tried to modernize art in Vienna at the start of the 20th century. They were founded in 1897 by Gustav Klimt and other artists. The Secession artists took inspiration for their artwork from other painters in Europe and the developing Art Nouveau movement.

The first show to be housed in the newly constructed Secession Building was in 1902. The renowned Beethoven sculpture by Max Klein was among the different mediums on display in the show. The Secessionists believed in the concept of Gesamtkunstwerk, or the combining of all creative disciplines (such as music, painting, sculpture, and architecture) to create a single, cohesive whole.

The Secessionists, under the direction of Klimt, organized exhibitions and activities and published the periodical Ver Sacrum in Vienna. Klimt’s Beethoven Frieze was painted with light materials that were not designed to last over the years and were made just for the exhibition. It was only supposed to be ephemeral. Contrary to other friezes in the exhibition, this one was taken down by Klimt admirer Carl Reininghaus at the end of the run and kept in storage for a while.

Beethoven Frieze by Gustav Klimt is a sizable frieze artwork that is housed at the Vienna Secession Building in Austria. The frieze was painted by Klimt in 1902 for the annual Vienna Secession show. It was displayed among several other pieces devoted to Ludwig van Beethoven. The cycle was initially meant to be taken down after the show. The frieze was divided into seven sections and removed from the wall in 1903 after being purchased by a collector.

It was sold to Jewish businessman August Lederer in 1915. Later, in 1938, the Nazis took control of much of Mr. Lederer’s art collection, including the frieze. The priceless piece was purchased by the Republic of Austria in 1973, and it was made available to the public in 1986 in a chamber designed just for it during the Secession.

The frieze consists of three distinct wall portions and is an amazing seven feet tall and 112 feet long. Klimt’s Beethoven Frieze explores allegorical themes relating to the quest for pleasure and salvation of man via the arts. It was loosely inspired by Beethoven’s 9th Symphony, as interpreted by Richard Wagner.

Allegorical compositions frequently employ symbolism or personification to convey a point. The artwork is frequently regarded as one of Klimt’s best successes and the first piece produced during his “Golden Period,” when the artist started utilizing large amounts of gold paint and gold leaf.

As already mentioned above, the Beethoven frieze was expressly made by the artist for the 1902 show. The public had an unfavorable reaction to the image. It was described as lifeless, harsh, and unattractive. This was especially relevant to the three Gorgons that were seen. The public said that they lack chastity, purity, and abstinence.

The Secession building is still dedicated to modern art in varying exhibitions, as it was during Klimt’s period, and may be seen on guided tours. You may get literature about Gustav Klimt as well as lovely copies of elements from the frieze at the Museum Shop.

Due to the frieze’s notoriety and appeal, it served as the primary design for the Austrian 100-euro Secession Coin, which was struck on November 10, 2004. A minor section of the frieze may be seen on the backside. Three characters are depicted in the painting excerpt: a knight in armor symbolizing “Armored Strength,” a lady bearing a wreath of triumph in the backdrop, and a second woman with her head down and her hands joined, indicating “Sympathy.”

In Klimt’s Beethoven Frieze, the artist depicts a man’s quest for significance while overcoming hurdles on his path to happiness and redemption via art. The frieze is an allegory in which many figures represent both positive and negative aspects of humanity, such as ambition, compassion, death, lust, and grief.

The picture, which is shaped like a U and painted on three walls, depicts the journey of a man in a number of different scenarios. The use of gold and gilded accents, the vivid and vibrant use of color, and the profoundly symbolic substance of the frieze are clear and visible. It also generated a lot of controversy due to the female characters’ overt lasciviousness and nudity.

Music has an important part in the frieze. It serves as an example of the human quest for pleasure in a world of sorrow and turbulence where one must battle both internal and external forces. The audience is taken on an explorational journey in a visually striking and linear way.

Beethoven Frieze starts out subtly with the female Genii hovering around and scanning the planet. The dark, sinister-looking storm-wind giant Typhoeus, his three daughters, the Gorgons, and images of disease, lunacy, death, desire, and wantonness follow shortly after. Then the dazzling knight arrives, bringing hope to the desperate, suffering humanity through his own ambition and compassion. The voyage concludes with the discovery of joy via the arts, while contentment is symbolized by a kiss’s close embrace.

Detailed Description Of The Beethoven Frieze

Beethoven Frieze’s left panel is called “The Longing for Happiness.” It has a number of ethereal floating female figures that appear to be moving through air or water at the painting’s top. A group of characters, including a naked lady and a couple who appear to be praying to a knight in gold armor standing in front of them, greet them as they enter. The section is titled “The Suffering of Weak Mankind.”

The knight, topped by the feminine representations of ambition and compassion that serve as his guides on his trip, looks bravely in the direction of the subsequent tableau, which takes up the entire center wall of the frieze.

Gradually, the painting moves to the middle section. The middle section is known as “Hostile Forces“ because it is the wall of the frieze that is most heavily populated. The gigantic, ape-like figure of Typhoeus is the main subject of the scene. Typhoeus was a beast created by Tartarus and Gaea in Greek mythology.

The ape monster occupies almost the entire wall and has a snake body on the far right side of the painting. It has gigantic wings. His daughters, who are shown as naked Gorgons with snakes for hair and stand in for sickness, madness, and death, surround Typhoeus. Another skeleton Death figure looms over them, menacingly.

More female figurines on Typhoeus’ right represent lust, unchastity, and intemperance. Intemperance has a huge, spherical belly and is decorated with objects that have been glued to the painting’s surface, such as stones, gems, and metal shavings. Grief is shown as a lone, distressed figure to the right, amidst Typhoeus’ circling tail and wings.

The voyage of the floating figures continues on the far right wall’s “Longing and Desire of Mankind” mural. The feminine representation of poetry is seen here, reading a book and surrounded by gorgeous gold craftsmanship. A chorus of angels is singing after a column of stacked female figures representing the arts is seen to the right.

The angels are supposed to match Beethoven’s “Ode to Joy” passage from his Ninth Symphony, according to Klimt. The frieze’s last image shows an embracing pair with intricate gold patterns and paint, signifying redemption attained through artistic experience and invention.

Klimt produced the Beethoven Frieze, one of his most well-known pieces, in 1902 for a Secession movement show. The entire performance served as a tribute to Ludwig van Beethoven. Visitors entered the building and were welcomed by a massive frieze by Klimt. This lavish, decorative “symphony,” which is 34 meters broad and 2 meters high, was Klimt’s attempt to immortalize Beethoven’s “Ninth” and Richard Wagner’s rendition of it.

Klimt’s Beethoven Frieze work not only left a lasting impression on its contemporaries but also on the world at large, and it continues to do so.