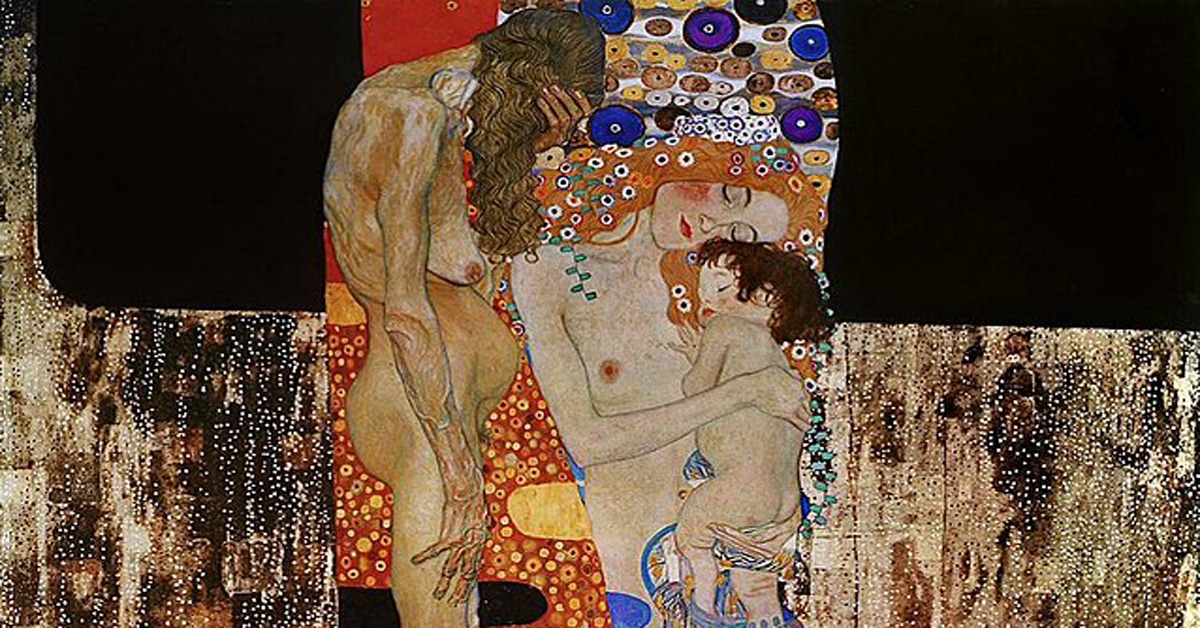 Gustav Klimt painted The Three Ages of Woman, an oil on canvas work of symbolism and Art Nouveau, in 1905. It is housed in Italy’s Galleria Nazionale d’Arte Moderna. The picture has the keywords allegory and ladies and is in the public domain.

The artwork shows three phases of a woman’s life. The relationship between mothers and infants is depicted thoroughly. A devoted mother is holding her newborn, displaying their intense relationship and unrelenting love for one another. On the contrary, the elder woman on the left side of the image seems exhausted and alone. Since you came across this article, you must be wondering about this amazing artwork. So, let’s explore this breathtaking masterpiece by Gustav Klimt.

Brief Biography of an Author

Klimt served as the Vienna Secession’s intellectual and pragmatic leader. To accompany the break from the past that came with the fin de siècle, he strove to produce new art that owed nothing to what had come before.

He was fourteen years old in 1876 when he successfully completed the admission exam for the Kunstgewerbeschule. After earning his degree in 1883, he founded the immensely successful Kunstler-Compagnie with the help of his brothers Ernst and Franz Match.

They established lucrative careers for themselves by illuminating allegorical works and customarily adorning theaters all around the Austrian Empire. Up to Ernst Klimt’s passing in 1892, this resulted in municipal commissions in Vienna. Klimt thereafter produced relatively little art between 1893 and the early years of the new century while working slowly on the Vienna University Commission.

In an effort to inject fresh perspectives into Vienna’s artistic scene, the inaugural Secession exhibition of 1898 focused on international artists. They were successful, and in just a few short years, Vienna transformed from a conventional backwater to a center of cutting-edge artistic creation and ideas in Europe.

With the slogan “To every generation its art,” Klimt led a group of like-minded painters to secede from the Künstlerhaus in 1897 to form the Secession. Every art form has its own independence. When his numerous well-known paintings were created, Klimt entered his “Golden Phase,” during which time he became the most well-known artist in Austria until his passing.

Nobody is certain what transpired during those years of inactivity to transform Klimt from a renowned conventional artist to the creative forerunner of the Art Nouveau movement.

What Does “Three Ages of Woman” Represent?

Gustav Klimt created The Three Ages of the Woman in 1905. This piece is currently housed in Rome, Italy’s National Gallery of Modern and Contemporary Art. The painting is done with oil on canvas 180 x 180 cm square. It was purchased by the Galleria Nazionale d’Arte Moderna in Rome in 1912 after winning the gold medal in the international exhibition there in 1911.

Three Ages of Woman exemplifies Klimt’s use of the impasto painting technique. To prevent an unwelcome shiny sheen, he mixed drying solvents into the paint as he was painting. Additionally, Klimt typically went back to his already-finished paintings to retouch them and make some changes. Klimt’s Golden Period, which also contains masterpieces like The Kiss, includes The Three Ages of Woman. High decoration and the use of gold and metallic paints were common during this time.

The picture has three female figures in it. The young woman and kid are in a column of mostly cold colors, while the elderly woman is in a column of mostly warm colors. The image is incredibly colorful. Numerous shapes that appear to be abstract surround the people inside the columns and may perhaps be based on the work of Ernst Haeckel, who utilized microscopes to discover artistic patterns in nature.

It’s interesting to note that Rodin later created a sculpture of Klimt’s “The Kiss.” The woman is the only individual in the image whose feet are visible, allowing us to realistically and in great detail see her collapsing veins. In addition, she has a protruding tummy, drooping breasts, gray hair, and emaciated shoulders, and she holds her head in her left hand with a look of despondency. She is so exhausted. The signals are clear: life is just temporary, death is final, and aging and degradation are undesirable.

The three figures are the focus of the piece and are in the center of the canvas. The background lacks depth, giving it a rather two-dimensional appearance. The colors have a soothing effect since they are neutral. This piece displays Klimt’s frequent use of vivid themes.

The mother figure has rouged cheeks and closed eyelids, yet she is very thin and pale. It contrasts shockingly with the elderly woman’s head next to it because of its false beauty and luminosity, which are so characteristic of Klimt. In order to further enclose and safeguard her sleeping child, the mother holds the infant close and crooks her head over it. To further emphasize the emotional content of the composition and the contrasts in the cycle of life, all three characters are naked, bearing their bodies and souls to the audience.

What Inspired “Three Ages Of Woman”? – Influence Behind Artwork

Brunelleschi’s geometrical perspective, which ruled Western art for 450 years, is not even attempted in Klimt’s artwork. The Japanese ukiyo-e prints, which were prevalent in Europe at the time, had a huge effect on the Impressionists.

The theme of The Beethoven Frieze of 1902 is continued with the subject matter, which examines the human condition. In Three Ages of Woman, Klimt represents three of the many women that appeared in his work. He emulated English Art Nouveau illustrator Aubrey Beardsley in both the erotica of his work and the use of lines.

Klimt wasn’t the only member of the avant-garde movement in Vienna at the fin de siècle to place sex at the forefront of everything. Psychoanalysis was developed by Sigmund Freud, and he wrote a number of books, including The Psychopathology of Everyday Life in 1901, The Interpretation of Dreams in 1899, and Studies on Hysteria in 1895.

Additionally, Nietzsche and Schopenhauer were authors that Klimt read. Nietzsche wrote The Birth of Tragedy in 1872, which Klimt translated graphically in Schubert at the Piano (1899) and Music II (1898).

Klimt’s artwork was therefore influenced by contemporary ideas in both philosophy and psychology. His understanding of how we all function in society as sentient beings were at the leading edge of human intellect and a paradigm shift from what art had previously shown.

The image of Three Ages of Woman has both simply ornamental components and figurative aspects, and it is partially inspired by Margaret Macdonald’s work, which was on display at the ninth Vienna Secession exhibition in 1900. The Byzantine mosaics in Ravenna, which Klimt visited twice in 1903, might also have had an impact.

The bottom of more than two-thirds of the image is made up of trails of what appear to be bubbles, or possibly rain, in a brown liquid. The upper third of the image is a solid dark brown.

Symbolism In Three Ages Of Woman

Both allegory and symbolism were utilized by Klimt. In Three Ages of Woman, the mother’s hair is covered in daisies that are a metaphor for spring and honor his extensive classical training in art at the Kunstgewerbeschule. The symbolism in this Klimt creation can be found in the emotive Wagnerian topic of decay and death, as well as the path through life that leads there.

Richard Wagner, a German musician, had a significant impact on the Vienna Secession and other Art Nouveau movements. Wagner’s profound psychological and emotional understanding, as well as his description of the human condition, inspired numerous painters and artists.

In Klimt’s Procession of the Dead from 1903 and Death and Life from 1910, we see death and decay once more. The elderly lady, the Old Courtesan, a sculpture by Auguste Rodin, which had been displayed at the ninth Secession exhibition in 1901, served as the inspiration for In Three Ages of Woman.

In contrast to a mother and a kid, the elderly lady shown in Three Ages is not attractive. Klimt has been accused by feminists of promoting the idea that a woman’s existence ends when she reaches reproductive maturity.

Of course, the artist did not hold to progressive ideals, and the majority of his paintings were of attractive young ladies. However, even now, this artwork may serve as an effective example of the significant issue of how older women become “invisible” to society.

Three Ages of Women represents three major phases of a woman’s life – childbirth, motherhood, and old age. The painting belongs to Gustav Klimt’s renowned “golden” phase and is notable for its numerous ornamental elements, which the artist started incorporating into his work under the inspiration of the Byzantine mosaics seen in Ravenna.

Besides, some academics think that the British artist Margaret MacDonald, whose creations were shown in the Vienna Secession’s ninth exhibition in 1900, had a significant effect on the “Three Ages of Women.”