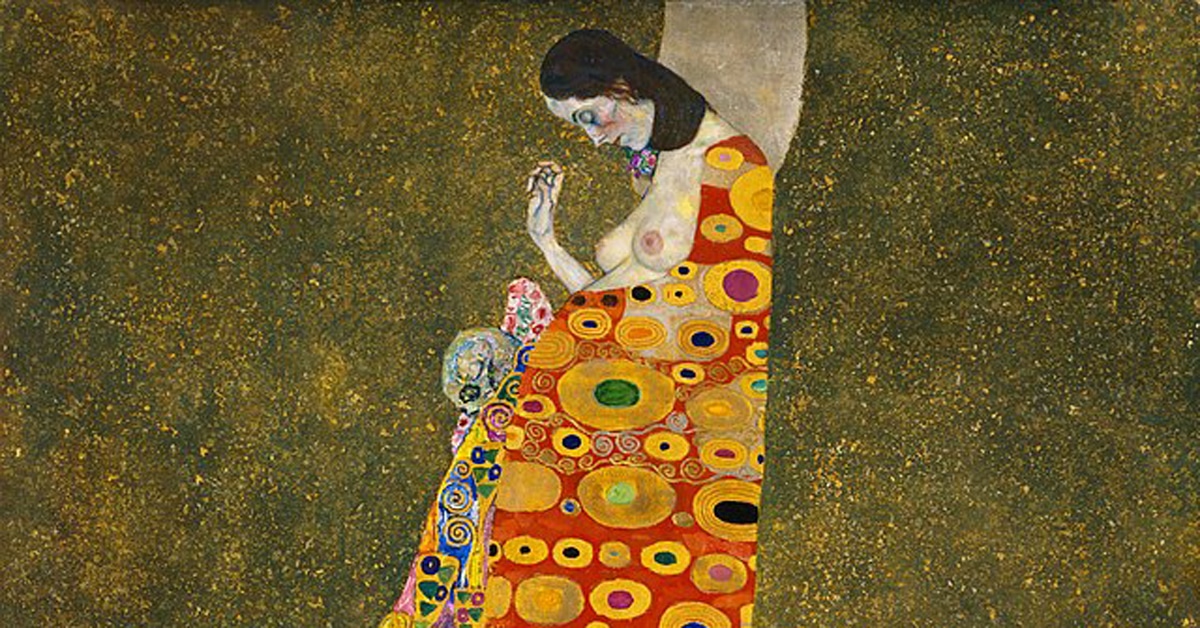 A wide variety of elements, including ancient Greek art, Byzantine mosaics, and late-medieval painting, had a significant impact on Klimt’s highly ornamental, sensual female figures. One of Klimt’s amazing paintings, dating back to 1907, is Hope II.

Gustav Klimt was born in the Vienna district of Baumgarten. His father, an engraver, fostered his passion for the arts. He received his academic schooling at the Kunstgewerbeschule in Vienna, and afterward, he collaborated with his brother to work as an artist-decorator. The primary themes of Klimt’s art are the primordial powers of sexuality, regeneration, love, and death.

The Kiss, the most famous piece by Klimt, features exquisitely detailed individuals floating dreamily in space, their elegant curves hidden by an abstracted mosaic cloak. The organic shapes and rhythmic, flowing lines of Klimt’s unmatched paintings had a significant impact on the Art Nouveau style.

Gustav Klimt, a well-known artist, created the picture Hope II between 1907 and 1908.

It is painted on canvas and consists of oil, gold, and platinum. It is 43.5 by 43.5 inches in size. It depicts ladies and tells a tale, just like many of Gustav Klimt’s paintings. The Museum of Modern Art in New York City purchased Hope II in 1978.

The painting’s surface is nearly covered with elaborate ornamentation. Klimt was dedicated to craftsmanship, and he was one of many painters of his day who fused antiquated customs. In this case, a Byzantine gold-leaf painting with a contemporary psychological theme.

Prior to December 1914, Eugenie Primavesi purchased the artwork, and Vita Künstler or Otto Kallir’s Neue Galerie sold it in the late 1930s. Up until 1978, it was held in private collections until Hans Barnas sold it to New York City’s Museum of Modern Art (MOMA).

Description Of The Artwork

The women take up the middle third of the artwork, with the background on each side being a deeper, gold-flecked background. In contrast to the carefully painted and molded human faces and naked flesh, as well as the deeper tones of the backdrop, the woman’s attire, is brightly colored, patterned, and covered in gold leaf.

The woman has bear breasts, but they are hidden by a colorful scarf. The shawl is created with intricate designs that include curves and spherical forms.

As if asking for her unborn child’s protection in prayer, a pregnant woman lowers her head and shuts her eyes. A death’s head may be seen peeking out from underneath her tummy, warning her of the peril she is in. Three ladies with bowed heads are standing at her feet, raising their hands in what appears to be prayer as well, yet their seriousness may equally be interpreted as sadness as if they knew the child’s end was near.

Everything that is going on in the image is united into a long column of sorts, and it creates an almost straight line. On the other hand, everything is rounded outward to the left. A solid background without a view is formed in the rear by a speckled golden-brown surface.

Rarely do pregnant women appear in works of art. Many historical images feature women and children, but expectant moms and the idea of pregnancy are oddly absent and exist outside of the creative mind. Klimt showcases the magnificence of the optimism that is about to blossom by placing this expecting mother at the center of the picture. In Hope II, a lady lowers her head toward her protruding abdomen while a skull is tucked inside her robe.

Klimt, however, makes us face the realities of birth and death inside the same frame by including her death as a companion. The lady finds herself caught between the paradox of life’s beginning and conclusion, positioned either under the prospect of a “healthy delivery” or the “tragic early death“ of her kid.

Although the woman’s flesh is rounded and dimensional, her gold-patterned robe is drawn flat, as clothing is in Orthodox icons. This garment has incredible ornamental splendor. Paintings by Gustav Klimt are a superb illustration of how technique, pattern, and color can come together. Birth and death coexist, poised in harmony, and partners in the will to live. The impact of art as well as how well Klimt accomplished the intriguing theme of pregnant women in art.

Use Of Freudian Flair In Hope II

A similar previous artwork by the artist, “Hope,” depicts a pregnant woman. Hope II, in association with its predecessor, exhibits Klimt’s pattern of pregnant ladies and the weight of hope they carried in their wombs. Klimt uses a Freudian flair to make Sigmund Freud‘s investigations into the infant within every adult character visible in this environment of mother concern.

Klimt was close to this psychoanalytic inspiration since he lived and worked in Vienna at the start of the 20th century. And Vienna is Freud’s hometown. Similar to Freud’s psychiatric research, Gustav Klimt frequently explored formative desires like sex and death in his paintings.

Hope I By Klimt

Herma was one of Klimt’s models, and the artist thought her “arse” was more attractive than many of his other models’ faces. According to the story, when she allegedly failed to show up one day, he was naturally furious and dispatched someone to seek her out. Herma couldn’t pose for him since she was pregnant, according to the word that reached them. Nevertheless, Klimt demanded that she serve as a model, and despite Herma’s personal reservations, she ultimately consented, allowing the artist to create Hope I.

As the woman’s curls fall over her cheeks, her vivid orange hair fills the canvas. Her head is topped with a little floral crown that frames her features. Instead of cradling the child, as is customary, the mom lays her hands together on top of her belly.

Her nipples are painted a vivid orange color to match the color of her hair, giving the woman’s breasts a prominent place in the painting. Comparatively speaking to Klimt’s other female models in his other works, the woman in this picture is diminutive. Perhaps the lady was shown with a slimmer shape to emphasize the child’s seat on her huge belly.

The vertical component is still wonderfully placed, but the viewer’s attention is drawn to the backdrop. A dark blue design and a bold red pattern are both prominently displayed next to Herma’s legs. The patterns have an art nouveau feel and some Art Deco-inspired features. These designs serve as an example of Klimt’s viewpoint that decorative art may be just as significant as high art.

Waerndorfer, the banker for the Vienna Workshop, who regrettably went bankrupt in 1914, purchased Hope I. Only a few chosen acquaintances were allowed to see the picture since it was stored in a unique cabinet made by Koloman Moser. The censors rejected the piece on the basis of obscenity when it was suggested that it be included in the 1901 show in the Secession building.

The Kiss was painted concurrently with Hope II, a later portrayal of the same topic that is dressed up and therefore more acceptable. The composition and coloring of the two are very similar.

Hope I & Hope II: A Comparison

So why is the title of the painting “Hope II”? Although he had previously titled an earlier, related painting of a pregnant woman Hope, Klimt gave this piece the title Vision. This piece has been given the name Hope II as a result of its connection to the prior one.

Herma was painted by Klimt in Hope I in 1903 while she was heavily pregnant and nude. She is dressed in a long gown or cloak in Hope II that is adorned with geometric patterns. She is bending her head towards her exposed breasts and protruding belly while wearing long brown hair and closed eyelids.

She has an odd human skull stuck to the front of her outfit, either as a reminder of the risks associated with labor or as a memento mori. This is similar to the notion that there are also death-like figures present. Three more women are likewise bowed down at the base of the artwork, maybe in prayer or sadness.

Hope II is one of the greatest artworks that represent Gustav Klimt’s golden period. Klimt was one of several European painters of his day who drew inspiration from traditions from societies other than their own.

Although the woman’s body is rounded and realistic in this picture, her gold-patterned robe is painted flat like other garments and has an outstanding ornamental appeal. In Hope II, birth, death, and the sensuality of the living coexist in harmony.