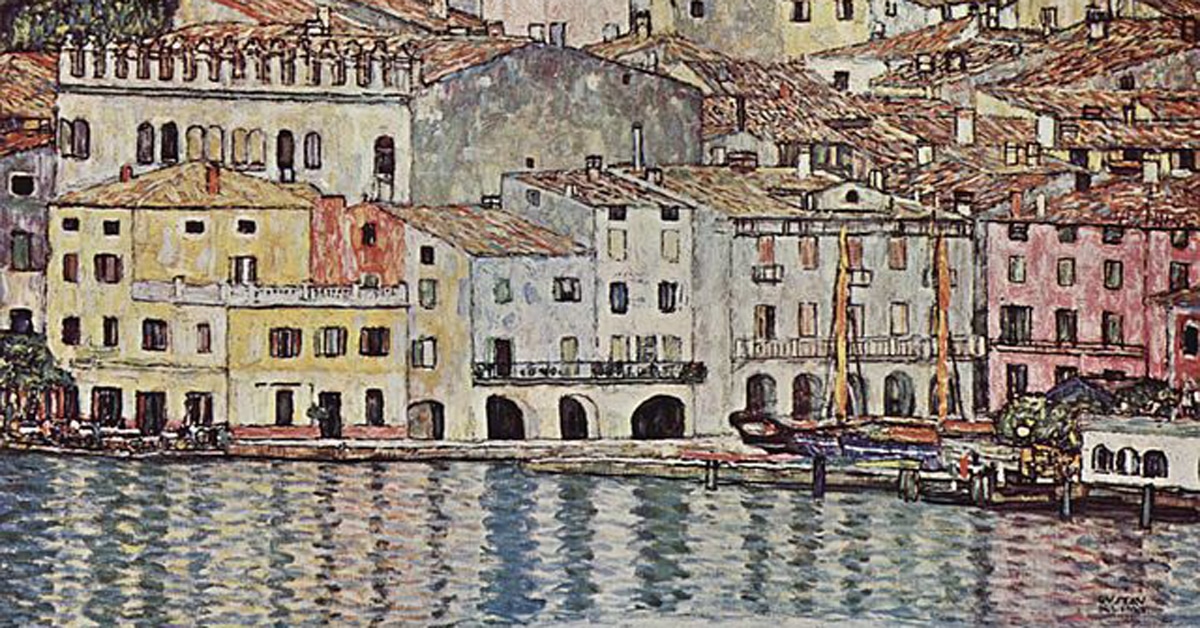 Although Gustav Klimt’s landscape paintings are less well recognized, they are nonetheless a very important part of his body of work. One of his best-known locations is Malcesine on Lake Garda. The piece is an extraordinary fusion of his firm, vibrant creative style with the breathtaking surroundings of where he would work.

Egon Schiele, a fellow painter with whom Klimt had a strong relationship, cherished international travel for its ability to further his art. Such inspiration motivated Gustav to include the famously beautiful Italian lakes in his landscape series. Are you interested in learning more about the “Malcesine on Lake Garda” painting? Keep reading to discover some fascinating facts about the painting.

In the summer of 1913, Klimt, one of the most well-known painters of all time who continues to enchant us with his paintings, visited Lake Garda. Even though the Balkans were in upheaval and dark clouds were starting to gather over Europe, 1913 was still a reasonably calm year.

Klimt’s output changed at that time; it may be said that it became a touch darker. It is hard to avoid taking into account each artist’s work in the context of his or her own period and experiences.

For example, when allegorical paintings for the University of Vienna were rejected at the very beginning of the 1900s, this incident left a lasting impression on the artist. He hadn’t provided the standard canonical interpretation.

Even if the friezes from the Vienna Sécession palace are no longer at their prime, they nevertheless have a special place in our hearts and are a must-see. From that point on, Klimt would focus more on painting portraits of affluent Jewish families and other high-class women in Vienna, moving away from the separatist movement he co-founded with fellow painters in 1897. He left art nouveau at the same time and committed himself to views of landscapes and gardens.

Beginning in the early 1900s, Klimt started to travel with his family to the Attersee for extended summer visits. There, he devoted himself to painting landscapes and vistas. In 1913, he made the decision to depart from his usual routine and travel to Lake Garda with his mother and sisters to spend July through September there. It was formerly believed that he had remained in Tremosine at the Morandi Hotel, where a memorial monument is still in place. However, following the publication by Paolo Boccafoglio in recent years, it turns out that he really stayed at a rural villa in Malcesine.

The finding is related to previous testimony and a letter that Klimt’s sister wrote to her son, Hermann. The painter selected Lake Garda for his only trip abroad. The work that defines him throughout his time in Italy is associated with the landscape.

Klimt often enjoyed creating these pieces outside, frequently with the aid of binoculars and then finishing them in his studio. They were square in shape, elegant, and still, and they symbolized an objective moment of observation of nature.

Malcesine – A City Represented By Klimt

The city portrayed in “Malcesine on Lake Garda” is located in Verona. Malcesine is described in an antique dictionary as “a little market town in the Venetian province of Verona with a tiny harbor and defenses.” The town only has a population of 1930 people.

In the past century, Malcesine, a little market town on the upper eastern shore of Lake Garda, has developed into a well-liked, albeit overrun, tourist destination. However, the population of Malcesine did not significantly expand in tandem with the increase in popularity.

Klimt displays the old city center with its tightly packed homes and winding lanes, constructed around the castle hill. The Scaligeri family, an aristocratic family that ruled Verona in the thirteenth century, commissioned the construction of Castello Scaligeri, a modest fortification that dominates the castle hill itself. Throughout the seventeenth century, a Venetian garrison was located in the castle’s lower portion.

The most renowned and well-known picture, of which there are still some images, is connected to a complex enigma. Historiography states that Klimt’s friend Victor, a member of the Zuckerkandl family, purchased Malcesine on Lake Garda and Kirche in Cassone.

Victor was a prosperous businessman who oversaw one of the city’s most significant industrial complexes. He was also a member of a wealthy Jewish family from Vienna who had long controlled and energized the city’s cultural scene. He was passionate about art and had the means to amass a magnificent collection. Victor kept Klimt’s artwork until his death in 1927.

The picture eventually entered the Lederer collection, which is said to be the largest collection of Klimt’s artwork, as a result of numerous occurrences. The famous businessman who owned the property had wed a Jewess and was frequently visited by Klimt.

The picture was owned by several people until the Nazi Reich’s Anschluss caused all traces of it to vanish. Sadly, everyone is aware of what happened to the Jews during that period, aside from the fact that all of their valuables were taken and their homes were pillaged.

Before the publication of the book, it was always asserted that the first painting was destroyed in the infamous fire of May 8, 1945, at the castle of Immendorf. The SS then set the castle on fire to destroy all the pieces in the Lederer collection, which also housed many of Klimt’s works, including Malcesine on Lake Garda.

Malcesine on Lake Garda is a bustling painting that is typical of Klimt landscapes. It uplifts and harmonizes man and the environment. With aspects of Impressionism and Cubism, the color and shape are absolutely modern.

Many have contended that during this period, Cubist artists like Picasso, Gris, and Braque had an impact on Klimt. However, Schiele was more likely to have incorporated some of their innovations into his landscape paintings. In terms of his career, this specific picture is more of an exception than the beginning of a sustained new path.

Beyond the peculiar tale surrounding its origins and current state, what is most striking about the painting is its complete immobility, the deliberate removal of perspective, and the almost complete absence of the sky. The diminution of the lake, exactly where the water and the sky predominate, and the landscape of the picture truly begin to describe the soul.

Klimt was inspired to create one of the most exquisite paintings by the picturesque landscapes, towns, and structures of Lake Garda. The picture “Malcesine on Lake Garda” was created by Gustav Klimt in 1913 and shared the same perspective as the work “Church in Cassone.” Gustav Klimt’s paintings are generally done on canvas with oil. Most of his landscape paintings, which had a significant impact on Gustav Klimt’s Viennese Art Nouveau, are square-shaped.

The artwork is distinguished by its earthy color palette, which is particularly noticeable in the walls of the castle, the majority of the homes, and the shingled roofs. The Castello and its imposing tower frame the painting from a compositional standpoint, while the lake frames it from a lower perspective, giving the overall effect of restriction and narrowness.

This is in contrast to the wide-open hills covered in maquis that are visible beyond the rooftops and the lonely streets along the coastline. The openness of nature and the peace of the deserted streets contrast with the city’s tightness. The Palazzo dei Capitani is another structure from the thirteenth century that served as the residence of Malcesine’s Venetian overlords. Capitani del Lago fills the left half of the image.

The Malcesine promenade now is very different from the scene depicted in the Klimt painting “Malcesine on Lake Garda.” Rather than a deep tranquility, it is distinguished by the frenetic bustle that follows the tourist season.

It’s also interesting to note that Malcesine on Lake Garda was discovered to have been created with the aid of a telescope. Klimt had installed the telescope close to Villa Gruber, which is now Hotel Bellevue San Lorenzo on the lovely Val di Sogno peninsula in Malcesine. This conclusion might be drawn from the information provided, such as the lake seen above on the left and the mountain’s steep edges.

The employment of the telescope allows for the nearly complete elimination of perspective by crushing and flattening, but there is also a separation from the object it was intended to portray.

Klimt paints the view from a boat on the sea as he did in Austria, but what dramatically sets this picture apart is the way he handles the subject, the panorama, the lighting, and the shape. It’s a wonderful, light, spacious piece in contrast to his usual claustrophobic style of dramatic Austrian scenes, which is what most of his paintings are like. Rather than the depressing, emotionally loaded images of home, the attitude in Malcesine on Lake Garda is one of life and fun.