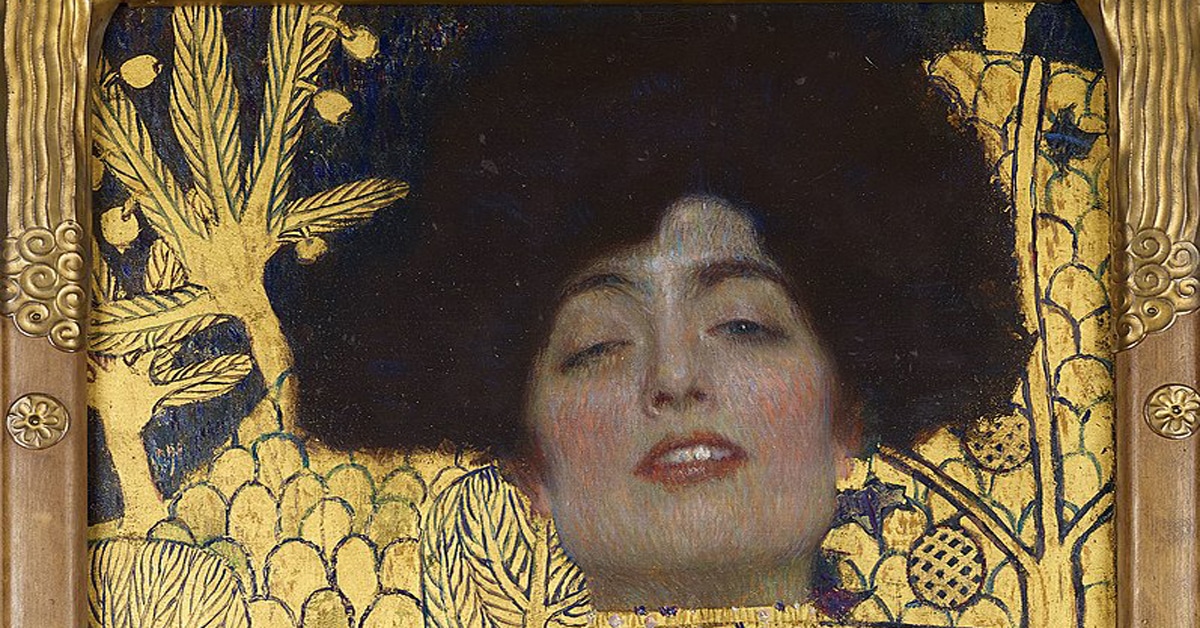 Gustav Klimt’s Judith and The Head of Holofernes is truly something unique. With one look, it is both astonishingly beautiful and scary. A beautiful woman, with a fancy posture, holding the head of a man can be kind of confusing. However, did you know that this woman is a biblical persona who saved her people from death? Well, let’s explore Klimt’s amazing and unique painting known as “Judith And The Head Of Holofernes.”

Why Judith And The Head Of Holofernes – A Story Behind

The story of Judith and the Head of Holofernes is presented in the Old Testament and later developed in apocryphal sources.

Judith was a beautiful and well-off widow from Bethulia, a Jewish metropolis. The Assyrian army had desperately besieged the city, and it was on the verge of giving up. Holofernes was the commander in charge of the Assyrians. Judith came up with a plan to assassinate Holofernes by pretending to leave her people and enter the hostile area to preserve her city.

Holofernes prepared a supper for Judith because he was enamored with her beauty and then brought her back to his personal quarters. He had intended to seduce her but was instead knocked out by too much wine, at which point Judith grabbed his sword and swiftly cut off his head. Numerous artists have been influenced by this inspiring tale. No different than Gustav Klimt. He projected the idea of a fearless and desperate woman.

The Renaissance brought about a politicization of Judith’s interpretations. She eventually came to represent a tiny but powerful populace that might overpower and win over a despot. Judith and Holofernes, a bronze statue by Donatello created in the late 1450s or early 1460s, was initially positioned next to the famous statue of David in the Medici palace’s garden.

Description Of “Judith And The Head Of Holofernes”

Gustav Klimt thinks of “Judith And The Head Of Holofernes” as a femme fatale. She was seen emerging from the enemy’s tent in his drawing. The girl did not even have time to sweep the corners of her robe since she was in a rush. Her outfit allows us to see her breasts. The head is not immediately visible in the hand.

Gustav Klimt completed the painting “Judith And The Head Of Holofernes” in 1901. It is believed that for this portrait, the wife of a well-known banker in Venice was posed. After carrying out the employment for a while, a new relationship with a foreign spouse developed. In the end, the world witnessed a conflicting picture. On the one hand, this woman has emerged as a hero. She handed Holofernes her charms after considering the triumph of the people. Many criticize her because it was more retaliation and fury directed at the all-male population.

Everyone is aware of the young maid’s dissatisfaction with her marriage, as evidenced by the fact that she showed little emotion upon hearing of her husband’s passing. The author employs solar colors as a representation of Jewish victory and a new era. The heroine’s eyes are practically closed, so it’s hard to tell if she approves of this method of death or feels guilty about having been murdered.

The golden hills and fig trees behind Judith also appear to be modeled by relief sculptures from Sennacherib’s palace in ancient Nineveh, which serves as a great touch to the picture.

The rectangular canvas used for “Judith with the Head of Holofernes” is painted on and is twice as tall as it is broad. The picture frame practically appears to enclose Judith within its limits, and the atmosphere is firmly controlled due to the limitations imposed by its size. This closeness creates an organic intimacy between the viewer and Judith.

Interesting Details You May Have Missed

The way that Judith is simultaneously so near to us and yet intimidating is what makes this such a powerful image. Her entire body language conveys that she is unfazed by her heinous act. She faces danger head-on, standing tall, resolute, and defiant.

Judith’s face is separated from the rest of her body by a large, golden neck pendant that she is wearing around her neck, simulating the decapitation of Holofernes (now that both of their heads have been severed from their bodies) and allowing us to glimpse a more transitory part of the picture. Because it appears to me that Klimt purposefully painted her head alone to give the impression that she is slipping away from us.

As for the hair, the black-brown halo seems to disappear into the golden background, particularly in the top-left corner, giving the impression that the subject is sliding backward and blending into the ornately decorated background of stylized trees and plants. Her clothing also appears to float in and out of the gold in a meandering brocade of forms and textures.

A layer of golden vegetation that represents the site of origin for all people serves as a kind of Garden of Eden in the background. We are seeing Judith slip into a state of suspended eternity into the embrace of the terrestrial paradise as her head and torso slide into this golden backdrop.

Do you think that the face of the lady representing “Judith And The Head Of Holofernes” is familiar? Well, you are not mistaken. Adele Bloch-Bauer, Klimt’s lifelong companion (and probable lover), served as the model for Judith. This can be explained by the minor details in the painting’s appearance, which may help explain the painting’s overtly sensual implications.

According to sources, Klimt painted Emilie Flöge and Marie Henneberg with similar weird crescent hairstyles, so possibly this was a common style at the beginning of the century.

The historical development of art had already defined the dominant interpretation and favored portrayal of the biblical topic of Judith. Klimt managed to represent her perfectly by creating Judith and the Head of Holofernes. Several heroic paintings depict the incident, particularly Judith’s bravery and moral character.

Although Judith appears to be God’s tool for redemption, the savagery of her actions cannot be disputed and is graphically depicted in Caravaggio’s as well as Gentileschi’s and Bigot’s renderings. Other depictions have captured the scene when Judith is holding Holofernes’ severed head in the aftermath, much as Moreau and Allori foreshadow in their evocative mythical paintings.

Gustav Klimt purposefully omits any narrative references and focuses his artistic portrayal completely on Judith, even to the point of chopping out Holofernes’ skull in the right margin. Additionally, there is no sign of a bloodied sword, suggesting that the heroine would have chosen a different weapon. The seduction of Nebuchadnezzar’s general, which occurred before the murder, appears to tie the narrative’s conclusion together.

The composition and symbolism of Judith and The Head of Holofernes are similar to those of Franz Stuck’s “The Sin.” The temptation depicted by the German artist serves as inspiration for Klimt’s femme fatale by suggesting the stance of the naked and vanishing body as the canvas’s main focal point as well as the facial expression.

The close-up and solidity of Judith’s posture, as shown by the orthogonal projection of lines, give her strength. The horizontal parallels in the lower margin, those of the arm, the shoulders joined by the collar, and finally, the hair base, correspond to the body’s verticality.

These femme fatale representations of women were common among painters and authors in the late 19th century, and they may allude to some level of anxiety around women’s growing independence. The development of psychological theories and the idea that the behavior of the unconscious drives in an unfiltered manner serves as inspiration for artists as well.

Sigmund Freud’s ‘The Interpretation of Dreams” was released in 1899. Oscar Wilde’s drama “Salome,” which centers on the death of John the Baptist, had its world debut at the start of the same decade, and Aubrey Beardsley adapted it for his eroticized pictures.

The painting was one method of gaining access to and describing these energies, which piqued the imagination of artists who believed that there could be unknown forces at work in people’s brains. A vast variety of works by artists like Franz von Stuck, Edvard Munch, and Alfred Kubin were produced during this period in Europe. These artists communicated their fears about women by portraying them as possessors of mysterious and unexpected abilities.

Klimt also participated in this tendency, fusing harsh depictions of women as seductively threatening with Art Nouveau‘s sinuous curves, twisting embellishments, and golden backdrops. Judith and the Head of Holofernes is a great example of this.

Klimt was a major character in Viennese artistic society and a member of the Vienna Secession, a group of Austrian painters, sculptors, and architects who pursued an interest in creating a “total art,” one that fused painting, architecture, and decorative arts into one cohesive whole.

Bottom Line – Judith And The Head Of Holofernes

The famous Austrian modernist painter Klimt liked depicting the female figure, frequently in a nude and sexual manner, in his works. If a guy had to be in the image, his face was typically subtly and artfully disguised by the artist, while the lady always maintained a straight face.

Judith And The Head Of Holofernes was one of his artworks where the female was dominant. The great representation of female power and the awakening of the biblical heroine was the perfect creation of Gustav Klimt.