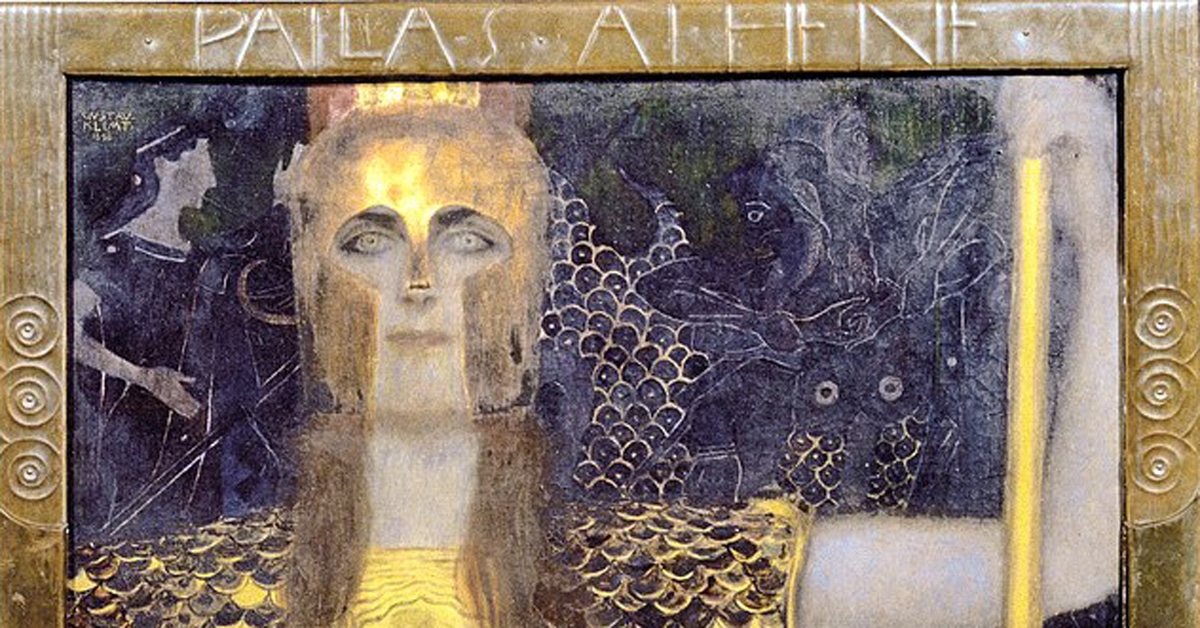 Did you know Gustav Klimt paintings were technically hidden throughout the Soviet era? Believe it or not, only specialists were aware of their existence. Only during perestroika and following the fall of the Soviet Union were the works of this artist widely accessible to the broader audience in the former USSR.

Although Klimt did not produce as many works of art as some of his great contemporaries, the fact that he did is sufficient to acknowledge him as a great master of painting.

Before exploring Gustav Klimt paintings closer, let’s first learn more about the artist. Gustav Klimt, the second of seven children, was born in Baumgarten, close to Vienna. The family consisted of 4 girls and 3 boys. It seems like boys enjoyed art and had a talent for it too. His Bohemian-born father, Ernst Klimt, was a gold engraver.

The unfulfilled dream of Anna Klimt (née Finster), whom Ernst married, was to perform music. Due to a lack of employment and a challenging economic climate for immigrants, Klimt spent most of his youth in poverty.

Klimt began his studies as an architectural painter in 1876, when he enrolled at the Vienna School of Arts and Crafts (Kunstgewerbeschule), where he studied until 1883. He admired Hans Makart, the preeminent historical painter of the day. Klimt, in contrast to many other young painters, embraced the orthodoxy of academic training.

The first superwoman in the collection of Gustav Klimt paintings is Pallas Athena. This artwork was created in 1898. Pallas Athena is shown as having defeated the whole male race while wearing gold armor and being hanged with weapons. Some aspects that originally surfaced in this painting would go on to play a crucial role in the master’s subsequent works, such as the use of golden leaf, the body’s transformation into a pattern, and the ornamentation of flesh.

The image shows a lady wearing armor, with her face and head partially hidden by the helmet and strands of her long, brown hair streaming over her.

She has a metal spear in her bent, uplifted hand and is leaning slightly on it. The persona carries the power attribute on the opposite hand, which is a ball with a little nude female figure attached to it. A shield with sarcasm imprinted on it adorns the neck of the chainmail made of gold rings. On the left side of the heroine, it is set against a wall covered in illustrations of feminine figures. On the right, a shaded illustration of a mythological animal is presented.

In contrast to other attractive women depicted in the Gustav Klimt paintings, Athena oozes power and has a seductive aggressiveness. The glow of her alive, blazing eyes, which started to represent the secessionist’s assertion of the right to free expression, matches the brilliance of her armor, including the shining helmet and breastplate of gold rings.

Athena’s performance astounded the reviewers, who dubbed her the “devil of secession.” This painting launched a new phase in the painter’s work, known as the “golden period.” Klimt caught the heavenly essence of Athena in the figure of the goddess.

A new era in Gustav Klimt paintings started at the start of the 1990s. Despite being well-liked in the creative circles of Viennese society at the time, the artist had a strong urge to push beyond the academic traditions. Klimt created the painting “Love” in 1895. It is one of Gustav Klimt paintings where the fundamental shift to modernism in style is plain to see. The impressionist and symbolic movements may both be seen as influences on the artist’s new approach.

The image at first seems to represent an idealized version of bliss. A loving couple is in front of us. Although the figures’ features are a little blurry, the artist captures them nearly photographically. The composition’s golden borders, which are decorated with exquisite flowers, further enhance its romantic ambiance. The work, however, reveals that the first impression was false upon closer inspection.

The girl’s look allows the author to deftly portray the girl’s emotions and attitude. His love has the ability to control the heroine of Gustav Klimt paintings. Her stance, thrown-back head, and slightly parted lips all attest to this. The young man has a chilly, untrustworthy expression. A toddler, a lady, and an ominous old woman are among the other female figures we can make out in the lilac-gray fog.

Together, these backdrop photos don’t evoke the best feelings. Rather, they resemble a piece of a nightmare that was accidentally recorded on camera. Three of these characters appear to call our attention to the transience of human existence and possibly even the fleeting nature of emotions.

Gustav Klimt paintings not only highlighted the beauty of love but also instilled in the viewer the notion that all that is lovely in this world eventually perishes, including sentiments between individuals.

The ceiling of the University of Vienna’s Great Hall was decorated with three Gustav Klimt paintings by the renowned Austrian symbolist artist Gustav Klimt in 1894. The artist utilized a new style that was far more direct and seductive than the typical allegorical imagery of symbolism, which led to many conflicting responses.

The composition was never shown on the Great Hall’s ceiling as a result. The so-called “Beethoven Frieze,” which was displayed during the fourteenth exhibition in Venice honoring the renowned composer’s birthday, was created by Gustav Klimt as a continuation of the triple paintings. For the show, the artist created a frieze, so he painted directly on the walls.

The subject “Embrace” comes from the last section of “Beethoven Frieze,” the Choir of the Angels of Paradise, and comes before the well-known “Kiss.” The three pairings resemble one another greatly, with the man’s back turned to the audience to shield the mistress’s body while displaying her joyful face. In all three variations, the male bends forward until their heads are at eye level.

The purpose of Klimt’s use of circles and spirals in contrast to square or rectangular shapes was clearly to highlight the differences between masculinity and femininity.

Style of Gustav Klimt paintings is breathtakingly gorgeous. “Adam and Eve“ seems to be a direct continuation of the “Kiss” motif. In the artwork, Eve, the world’s unclothed mother, takes center stage. She is shown with her hubby in the background. Adam’s form is shown as being rather hazy, by the way.

In the artwork, we can see Adam’s face and shoulders, but the skin of a leopard covers his legs. This piece most likely depicts this couple following their fall. Adam’s face appears worn out and dreary, whereas Eve radiates a sense of calm that permeates the entire world. However, slyness can be seen in her eyes. Adam is covered in leopard skin, while Eve is sitting on flowers at her feet. Eve is stunning, despite her bright bareness and obvious provocation.

This Klimt painting served as a reminder of the woman’s ancestry. Adam is shown as having the hue of clay. He is, after all, said to be composed of soil, but a woman is supposedly derived from a man’s rib. The right hand, as it dissolves in Adam, is a clue or maybe a metaphor for the union of spirits, and this is how the artist portrayed it.

The Golden Fish was initially known as “My Critics”, and its name was chosen to reflect the artist’s response to the criticism that followed the completion of a specific-style Gustav Klimt painting. Klimt responded to his detractors’ accusations of moral disobedience by creating a painting that openly and utterly flouted morals, sending the detractors to dark realms. The artist combines the human and underwater worlds. Gold floats in the sun-soaked sea.

In the midst of this, women are swimming naturally, like mermaids or even fish, while algal blooms move following the flow of undercurrents. The two people at the top of the image are simply the backdrop, they are not very bright. One of them has turned around, and the other is grinning but is only partially visible.

The focus of “Golden Fish” is a round lady seated in the front who is emphasized by the composition as well as the use of vivid colors. Like seaweed, her red hair waves and flutters. She is seated with her back to the spectator and is sneakily turning. After this image, there was a fresh wave of criticism, which Klimt disregarded.

The fact that women are shown as the major protagonists in Gustav Klimt paintings sets him apart from other artists. His paintings reflect generally relevant topics like death, aging, and love in vibrant, expressive hues, mainly in gold tones. Images of strong women and destructive beauty who rule over men and kill them stand out, especially on his canvases.

Gustav Klimt paintings are practically all in this contemporary manner. A structure or a masterpiece of Art Nouveau artwork cannot be passed without being noticed. It’s all about the picture; the elegance, the flexibility of the details, and the softness of the shapes.